April 14, 2015
Email from a woman named Kerry concerning a sighting she and her husband Brett had in Stapleford Woods, a 750 acre area of forest on the Nottinghamshire/Lincolnshire border. Both Kerry and Brett saw the 'animal' at the same time but they did have some differing opinions as to what they had seen and experienced. The were taking their 2 yr old Jack Russell dog named Kiwi a walk in the woodland when they heard what they described as a high pitched screech. Realising it wasn't that far away from whatever made the sound, Brett investigated further. Brett was surprised to see some kind of dark animal walking through the trees. He quickly called over Kerry, who picked up Kiwi in fear. Kerry descibes the animal as follows: 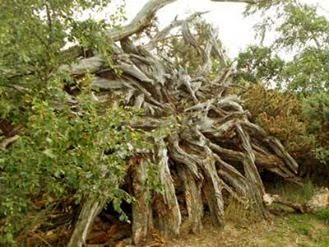 “Whatever it was was walking on all fours, like a dog would. But it wasn't a dog. It was walking in an odd way, sort of lumbering along. I know there are reports of big black cats in this area so I was certain I was a large cat, maybe a panther. Brett saw the same thing but he had a different idea. It was about five foot long with a sharp, pointy head, the hair was short and we could see patches of bare skin through it, like it was losing its hair. My husband wanted to follow it as it walked away deeper into the trees but I stopped him. It scared me and I thought I may be dangerous. When I asked Brett if it was some kind of wild cat he said no. He got the impression it was like a monkey or ape, similar shaped to an orangutan or chimpanzee but with stronger more solid arms and muscles, like a bear. I just assumed big cat but now I think back I did not see a tail and it did not move like a cat would. It could have been injured cat maybe? But my husband says it was like an ape but different. We looked on facebook and came across your bigfoot page. My husband says it could be one of the animals you are looking for but I only thought bigfeet lived in America. Can you maybe advise us what we can do?”

We emailed Kerry back as soon as we read her message. While big cat sightings have been reported in Stapleford Woods, this sparked our interest because of the unusual description, odd way it walked and the lack of tail. Brett swears it was like an ape. So, we wondered, is this another location of a British Bigfoot? We decided to go out and have a look in the area and conduct a daylight search on Friday afternoon. When we (myself and my dad) got there, it was completely quiet apart from an old man walking his labrador. It seems a popular place for dog walking and there is a parking area on the edge of the forest. But it certainly looked big enough to hide animals and we checked on the size on Google, Stapleford Woods is around 750 acres in size (one acre equals the size area of 6 British football pitches) so it seems sizable. We made a search of the area of the forest as best we could match it up to Kerry and Brett's description. We spent a couple of hours there and did try a few communication techniques (wood knocks, whoops etc) with no success. We carried out routine footprint searches but the ground isn't suitable for tracks except the muddy paths but nothing was found of interest print wise.
But we did find something that was interesting but inconclusive. I came across a strange little structure. It was made up of two sticks. One stick had been snapped and seemingly carefully placed and resting on another stick in the ground. We found this very interesting as it reminded us of the ground sticks that Neil Young has been finding up in Harwood. Maybe it is something, maybe it isn't. Something struck us as odd about the tiny structure for some reason. Nothing else of interest was found so we left. Feel free to comment on the stick structure we found and let us know your opinions. 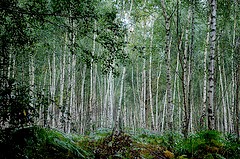