June 02, 2015
"Wolf at Large in Allendale" was the headline of The Hexham Courant on 10th December 1904. The Courant reported that in the last three weeks, farmers around the village of Allendale were stabling their animals at night as loss of livestock had become a serious concern. One farmer had found two of his sheep killed, one with its bowels hanging out. The head and horns were all that remained of another animal. Many of the unfortunate livestock had been bitten around the neck and legs, suggesting an attack by a wolf.
It was suggested that the perpetrator was a grey wolf that had escaped from its owner, Captain Bain of Shotley Bridge. However, Shotley Bridge police station had recorded Captain Bain's wolf as being only four and a half months old and not much of a danger to men or livestock.
Sightings of the beast began to filter through the community. A report of an imposing looking wolf lurking around behind Allenheads School brought a hunting party of 150 residents to the scene, some armed with guns. A search of the area found only a spot within a large drain where it was thought the beast may have slept. The Hexham Courantreported on the 17th December that on the previous Wednesday, the wolf had committed"great slaughter of a flock of sheep" - the wolf had been tracked by a 100 strong hunting party, but could not be driven towards the guns of the group. The following day, another hunting party 200 strong, half of whom were armed with guns again attempted to track the wolf, but the search proved hopeless.
Further sightings, sometimes conflicting, were reported over the next several days, describing the beast as "black and tan" or "dun" coloured.
The community became unsettled. Lanterns were kept burning overnight in an attempt to ward the wolf away and the Hexham Wolf Committee was founded to organise efforts to track down the beast, offering rewards to prospective wolf trackers.
Throughout the winter, the hunt for the Allendale Wolf continued. Reknowned tracking dogs, the Haydon Hounds were put on the trail but not even the prized bloodhound of the group, Monarch could find its quarry. Charles Fort, who recorded the case in his book, Lo! commented: "The wisedog was put on what was supposed to be the trail of the wolf. But, if there weren’t any wolf, who can blame a celebrated bloodhound for not smelling something that wasn’t?"
The Wolf Committee perservered and hired Mr W. Briddick, a "skilled Indian game hunter". Mr Briddick was intereviewed by the Newcastle Evening Chronicle stating that he would find the Allendale Wolf "on scientific lines". Despite his experience and scientific pretensions, Briddick was unable to track down the animal.
Despite the lack of success in tracking down their wolf, the locals adopted the continuing search as part of their folklore. Hunt days soon took on a sense of occasion complete with fancy-dress and sing-songs. 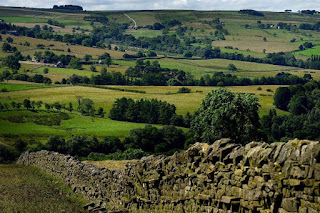