August 28, 2015
BRISTOL, United Kingdom — A Bristol resident says he witnessed an ape-like creature as it ate a piece of food with what he believes were improvised eating utensils.
A few trees stand on this early Fall photograph of Leigh Woods. Credit: Steinsky under CC BY-SA 3.0
58-year-old Harry, a retired man in Somerset county who provided a last name but chose to remain anonymous, told Cryptozoology News Wednesday that he was walking through the Leigh Woods Nature Reserve on Aug. 17 when the event took place.
“I usually take my dog, but lately I have avoided taking her there because she has been getting very skittish for some unknown reason,” says Harry.
Suddenly, according to the man, he began hearing noises as if someone was “snapping twigs” and “making squeaky sounds”.
“I thought it may have been a deer, so I went off the path to look,” he recalls. “This is when I saw this strange ape creature. It was sat in the brambles and it was digging in the earth with a twig.”
Reportedly, the alleged animal was doing this for about 5 minutes, then picked something up and began eating it. Harry believes this was a raw piece of meat.
“Then it got another twig and was picking pieces of meat from its teeth with it.”
But Harry was also aware that the strange-looking being appeared to be “communicating with something”.
“It kept looking left and was talking to something, and I thought I heard movement from where it kept looking. When I say talk it more grunted and squeaked,” he says. “at one point it started doing something with the twigs, crossing them over on top of each other, like he was weaving something. All in all I watched this thing for 25 minutes. It was only when it stood and walked off that I left. It stood up, grabbed a large tree branch and snapped it off quite easily, and it then leaned it against another tree, then it walked off and I never saw it again.”
The Somerset resident says he was about 200 yards away and managed to discern the physical features of the creature.
“When it stood up I’d say it was about 6 feet tall. It was old looking and it had a grey skin. I could see that it had human features, same sort of face but it looked more ape-like. Broader nose and cheeks and jaw that jutted out to look like it was curved. Looked like a prehistoric man from that Land That Time Forgot film, the old Doug MCclure film. It was covered in grey hair, with black streaks in it. Mostly grey though,” said Harry, adding that it also had “small breasts type things” but that it looked like a male because there was “something” in the crotch area.
The man explains that even though he was confused about what he was witnessing, he is sure that it wasn’t an animal.
“It wasn’t a horse or dog or anything like this. It was like an ape man. It was like a man living wild but like a Neanderthal or something similar. I have heard of Bigfoot, but it wasn’t like one of those, like the giant wrestler type of thing. I searched for Bigfoots in the UK and came across your articles on these sightings so I thought I would share this with you.”
Harry claims he was not “scared or worried” because the creature “seemed friendly”. Although, he adds, it didn’t get a chance to see the man.
“I am not interested in fame or being in TV,” he said.
The man did not immediately reply regarding video of photographic evidence.
The report comes one week after another British man claimed to have witnessed a similar creature in the county of Suffolk which reportedly took place only three days prior to Harry’s encounter.
The Woodwoose, also known as the Wodewose or the Wild Man, is a mythical creature present in European literature from the Middle Ages. Critics believe that inaccurate accounts of possible apes written by explorers and travelers in that time period may have been responsible for the creation of the myth.
Formed in 1909, the Leigh Woods is a 500-acre national nature reserve containing a rare species of Sorbus trees and a unique Arabis scabraknown as the Bristol Rockress. The area is also notorious for a series of violent deaths that occurred in 1857 and 1948. 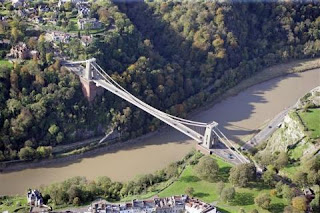 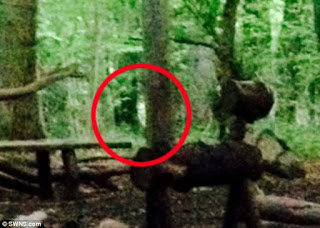 Quote from the Bristol post ' Leigh Woods has had a reputation for being haunted for some time. Years ago tramps lived in the woods favouring the Abbots Leigh end and avoiding the Leigh Woods part because of its evil reputation. It was said that screams could be heard in the night'