September 07, 2016
As more and more people become interested in the british wildman, and start to get out into the countryside and off the beaten track, Not only is more evidence collected, but the accounts of shadowing, rocks and tree limbs thrown, strange growls and dogs behaving scared and bewildered are starting to come into myself and fellow team mates at an ever increasing rate, this could be down to people accessing areas not usually accessed by people on a regular basis, or that fact it is now becoming much more accepted and easier to report.  There are some simple tips by Jason that i will add at the end of the article for anybody else that may be interested in becoming a researcher or just curious about the reports that come in from all across the uk.

Witness account: "I have been picking my walks carefully over the past week today I decided to go into my local woods approximately  one mile away @7pm. As soon as we got there, me and my daughter decided to walk off the beaten path. We walked about a 1/4 mile in and  I started to see shelters made against trees with branches,  lots of leaning sticks and twigs, at this point sunset was at 745pm, so it was already starting to get dimpsy (dusk/twigh light). I’m looking at these branches and sticks someone/thing had gone to a lot of trouble to pull branches a couple of men may have struggled with. It just did not make sense to me at all. At this point i’m still not convinced. Im also finding loads of broken branches from saplings or trees scattered that hadn't made it into the pile/structure? We left this area and continued for about 1/2  a mile, in there is another branch/stick cover but made much lower to the ground . Problem is the iphone cameras are rubbish in dimpsy light.The track now gets thinner a little overgrown with plants shrubs and  ground cover. So i decided to try a couple of wood knocks but nothing. So we carry on, As we walk through the woods I thought I could see a footprint but on closer inspection I'm not convinced at all. To hard to make out in the dying light. We start to Walk up a incline to another path now i see more broken sticks all over the place. Then between  the trees where it's clear people don't walk I find this! (picture 1) 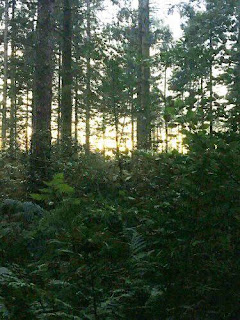 Stood vertical in the soil between leaves.It's like the bark has been picked off The texture is so smooth likes it's been held for some time.  My dog kept sniffing round it very intrigued . On we carry 80m up the path at this point it began to feel creepy, just spooked for some reason. I did a wood knock again! Nothing, as we stood in silence . Then we could  hear birds fluttering in trees above. Then total silence, nothing singing no sound at all. Its getting closer to 745pm now. And the light is fading fast. With my Torch In my right hand we continue another 50 metre or so.  Then to our right estimate 70m away snick goes a stick as if it's been stood on.!! We stand completely still in silence, we were clearly where people don't walk very often at all, not really knowing what to do?  We find big green bushes to our left that kind of looked like something had been lying down in it.  At this point my 10 year old daughter begged to turn back. She's believes in bigfoot,as seen it on line too via youtube vids.I hold out for another 10mins snick goes another stick. At this point it started to feel strange my patterdale terrier’s ears had pricked up and was looking densely into the woods. Right we had enough here and turned back and walked fast in the direction we came from. As we are half way back, snick goes another stick still around 50/60 meters away I would say. I'm flicking my torch into the woods as I turn round! But nothing could be seen. We start to walk faster to the car which is now less than 5 mins away parked at the  woodland car park. We have to use the big dirt gorge to climb down one side up the other. I’m stood at the top shining torch back and forth, i couldn’t see anything? Nothing but silence! And blackness.Im off again down over the hill and back to car. My daughter is first in and locked the door  and the one behind her. My patterdale at my side we get closer to the car, still in the thick of woods. Snick goes another stick to my left approx 25/40 meters away. The dog goes mental lets off a warning growl  Something she doesn't do very often at all. ("Its was low something I've only ever heard from her once before. when a pitbull went for her. She backed off last night and stood behind me which she never does. Being a dog she normally takes the lead and stands out to defend me but last night it was the other way round. She pauses and sniffs the air again back to growling in a millisecond.Suddenly I get a Whiff of something my pulse is racing?! The smell was strange kind of like musty/damp but with a Whiff of an animal. At this point i jumped in the car, the dog was in faster than me. Reversed and span the lights round on the trees but it’s just too thick to see anything.I'm not sure what the hell was out there ? But my dog doesn't ever freak out on woodland walks.This woods in on my doorstep, i have been up there loads as a kid, and throughout the years. I'm 35 now . And i’m only just learning how to track these things and what signs to look for. But never have I ventured off the beaten path. I have always stuck to the track. I didn’t realise off track just how dense and thick the woods can be, but I can now see that now. But living in a valley of 18k people never have I heard anyone talk about anything up there?

Half eaten sheep I have heard of lambs disappearing. But that has been reported so many times as a beast of Bodmin passing through. 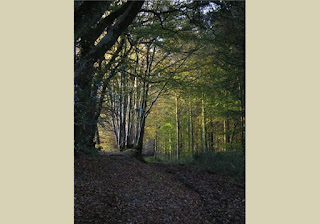 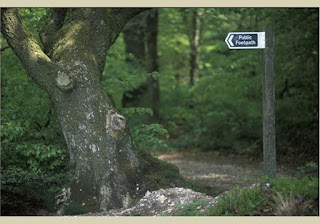 Go to a forest or wood, walk down a footpath. Whether a new or old place for you, choose a place you are comfortable, listen to the noises around you, and become used to this area, visit at different times of the year, as areas change over time and seasons.
1. Look for an opening in the bush, the smaller the better (But not so you have to crawl in there)
2. Follow that trail, especially if there are any sticks leaning against a tree near the opening, broken branches (especially over 6 foot high), or X's near the base of the tree.
3. After entering the thicket via that opening, you should start to see other sign (especially if there were markers at the beginning); more X's or A symbols (aka triangles) and/or arches which are pinned down on the thin end. Follow the signs. Sometimes arches will be natural, cause of trees falling on them etc. You need to learn to tell the difference.
4. Also look out for random sticks pushed in the ground. This is a sign of activity. They are markers (i think)
5. Take lots of pics. When taking pics of structures or signs (X's etc)
a. Get the whole structure in the frame. (fill the frame, edge to edge)
b. Get close ups of any specific details, like notches in the wood, or anything that you think may be significant.
c. Back up and take a shot of the whole scene and surrounding area, with the structure still in shot.
6. When filming, DO NOT JERK the camera. Slowly pan when possible. If you move the camera too fast, it's difficult to view afterwards because it will be blurry.
7. If you hear a grunt, growl, whoop, shotgun sound (tree knock), don't panic, you've made contact. Calmly say "hello, I don't mean to intrude, I'm just curious" (no joke) DO NOT RUN. OK it's not THAT bad, but you get what I mean?
8. Have fun :)
Photographs of all the above mentioned signs and structures can be found in the group photographs.