'A fisherman was walking home happily to Cromarty on the Inverness road, after visiting a friend in the upper parish. "The night was still and calm, and a thick mantle of dull yellowish clouds, which descended on every side from the centre to the horizon, so obscured the light of the moon, though at full, that beyond the hedges which bounded the road all objects seemed blended together without colour or outline." Out of nowhere he heard a terrible noise, like a huge pack of maddened, snarling hounds somewhere very near him, just beyond that hedge; he put his hands in his pockets but there was nothing but the last of the crumbs from the food he'd had on the boat. He held the crumbs out anyway, thinking they might appease the dogs. But there were no dogs; there was only a man, walking beside him beyond the hedge, keeping up with him, and the baying noise had stopped. Good, he thought; the dogs must belong to him, so I'm fine. But when he reached the gap in the hedge, he saw the figure grow and grow until it dropped on four legs and turned itself into a huge black horse.
He quickened his pace. The horse did too. He slowed, stood still. The horse did too. He walked his usual speed. The horse walked beside him. He saw it was an ugly kind of a horse, black-shaggy and limping, and when he reached the cemetery, a couple of hundred yards out of the town, the creature stopped, the air filled with sudden blinding light, like lightning, and "on recovering his sight, he found that he was alone." 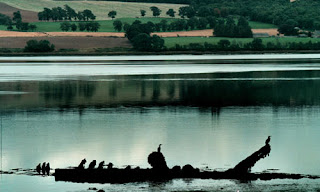 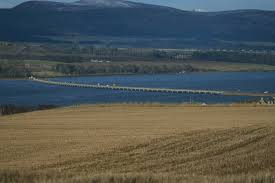