Ask yourself this one question before you hear me out!!!  If you were at home "under siege" by a monstrous creature that killed your wildlife, attacks and carries off dogs, tries to enter your home on many occasions, whilst your family sleep in bed upstairs. Walks the streets of council estates in the North Of England abducting children under the nose of the police and habitants mind you, would you.  (A). Search for your nearest source of help ie: 999. your local police, your local newspaper, remove your children to a safe place, make sure all livestock was sheltered or removed from harm, do everything you could to warn people and keep them safe. OR (B). spend ages doctoring photographs and stealing illustrations to make a weekly video on youtube, whilst the kids play in the creature's lair?    False accounts put research back years, we are now just coming to an understanding of what kind of souls we are dealing with, and like the witch master general before her did to our many herbalists and forest folk, she has set about a creature hunt, with smears and hate and lies.  https://www.youtube.com/watch?v=oLss67qT0CQ&lc=z12qi5mx1pzhjpk3u23byp2qzrqvgdgqs04.1485723056478537 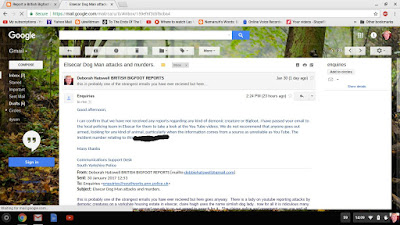 People are scared to visit the woods in the UK and they shouldn't be, there has never been an attack it is perfectly safe to take your children out of the woods in the UK and enjoy them that's What Nature is there for. To be stopped so somebody can have a few youtube likes is so sad. The UK is beautiful and our wildlife needs us to take an interest. 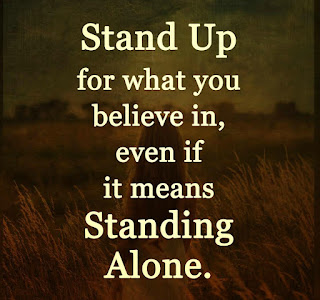 The simlish dog lady  presented herself to the British bigfoot research team some years ago now with an account that supposedly happened to her in Yorkshire, when any new witnesses come forward we always ask a series of trick questions, we have to, it's the only ethical way to weed out the hoaxers. So if they are honest they  will answer NO to most of them all. So we asked the simlish dog lady these  questions, unfortunately she said YES on each and every occasion.  No matter how silly the question i asked, she agreed? We also did a very extensive area check and used metadata from the videos to view the so called “sighting area”  which is in a very busy and populated city council estate, so we never added this report to the map  and we had nothing more to do with her or her claims. 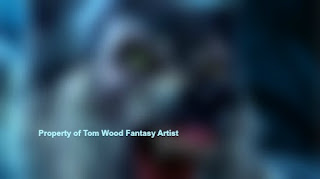 2 years later it came to my knowledge that the simlish dog lady had a YouTube channel and was stating claims of murders by dog men in the UK, dogs and animals being ripped apart, people told about terrifying encounters, homes being entered, Arms put through letterboxes and another hundreds of ridiculous claims, In our bigfoot research team we feel that all researchers should be ethical and honest on all occasions. So we checked with as many sources as we could to verify any of these claims and non were ever made or reported to the police or any government agency.  I live in a similar setup, if a hairy arm came through my door one night, the milkman would know by teatime and panic would ensue.

So we contacted the Police and PCSO in her area and other police forces around for several counties, we asked them if there's ever been any wolves, werewolves, dogman, creatures of any kind, or if any creature had tried entering  any premises.  the answer was NO we also asked them if there been any reports from the local park or surrounding green areas (and the green areas are just old scrub land, with no food sources or shelter as such). to research a claim you have to check it over and over, not just release it regardless of proof.  she does her research in a small children's play park,  yet this creature has a family of both bigfoots and dogman living on a manky croft where dog walkers leave their mess behind them and it's littered with rubbish and debris. 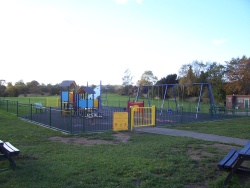 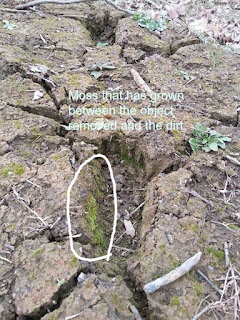 I have been accused by Lady Simlish of a vindictive attack or bullying or claims of  “your doing this for more likes, for more clips on my YouTube channel and I can honestly say I would rather have one like and no viewers and know that I am 100% honest, than 1000 likes for a made up account  and a fear that could cause creatures to be harmed. 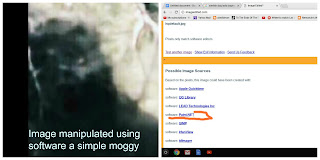 And there are little loopholes that some unethical researchers  will use so they don't have to back up their sources, “I was sent this photograph from a friend” or an article or via email”. Well that's very easy to prove isn't it?  you just do a  simple screenshot of the message showing the day and the time, black out the person's name by all means but we can still see the message, we can see you're not lying but it never happens does it, it's all smoke and mirrors,  show the link to the newspaper article or magazine spread.  We checked every archive out there  and the so called accounts are not there. Check for yourself. 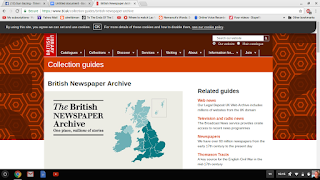 The only person in the UK making these claims is the simlish dog lady herself.  now I can't actually stop people  listening, but I what I can do is ask you to do is stop perpetrating a lie, it's not fair that people are frightened it's not fair that children are scared to play out,  not for YouTube likes. now I may lose a  few listeners by making this video. It Doesn't matter to me what matters to me is honesty.  To lie and fake just makes a mockery of real witnesses and researchers. It is not bullying to ask for a source. Its called ethical research. And that's all we at british bigfoot research want.  The UK has a hard enough time accepting “he/they” exist, or to accept their is no danger running around out there breaking into homes and running off with children. This is no more than Frankenstein villager mindset. You don't need torches to beat this monster, let google do it for you. 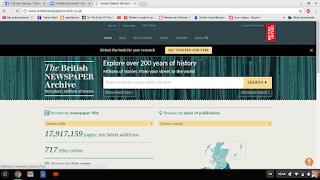 If you want to message me direct i can show you a certain email from an Arizona based illustrator whose work was stolen by the dog lady and passed of as her own, when attempting to hoax a documentary film maker. 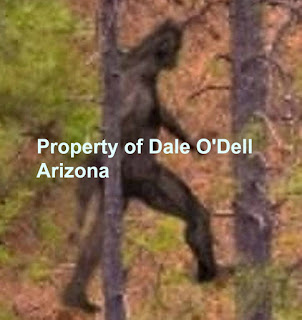 Lets keep it honest and clean, if you're out and nothing happens or you just have a wonderful day, report that. We need to get back into our nature not scared away from it.  So the next time you question on whether to enjoy the day out, don't let scaremongering scare you, just go and seize the day.