Growls and Mystery in the Simonside Hills June 17

June 18, 2017
Today's account came in through the British Bigfoot research group on facebook and was an experience that happened to one of the members Derrik Carvell he agreed i could share it here and on the map.

Witness Account Taken on 12th June 2017: Hi everyone, I have been meaning to post this story for some time, I hope you find it interesting. It may or may not have some connection to the UK Bigfoot or Woodwose. 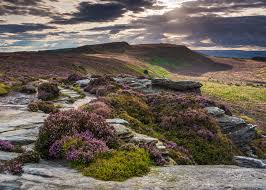 Several years ago my wife and I along with our German wired haired pointer Oskar took a trip to the Simon side Hills in Northumberland. The area is very beautiful with stunning views of Crags, forest and moorland. There are ancient legends of strange creatures there called the Deurgar, not sure if the spelling is right, but type into Google along side the Simon side hills and you will come across the stories and legends, I even think that there is a video on youtube about them. http://www.spookyisles.com/2013/07/the-duergar-the-dwarves-of-simonside-hills/ 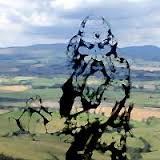 Anyway I know for a fact that large wild cats inhabit the Kielder area after seeing one on a trip to Kielder fishing about 8 years ago. A large grey cat sitting at the side of the road, at first I thought it was a fox, but it sat up and had a long thin tail with pointed ears and flat face, it strolled slowly into the trees at the side of the road, it was about the size of a Labrador.
Anyway to my story, we had decided to have a walk up the hill close to Simon side forest close to the ancient hill fort of Lordenshaws. Parking the car in a small clearing we walked a considerable distance up the hill. The flies started to become a nuisance and we thought it best to head back down the hill and have our sandwiches in the car. I was walking close to some hazel bushes, my wife Anne was about 30 yards away to my right and Oskar was beside her.  Suddenly I was aware of a loud growling sound coming from the bushes beside me, it didn't sound like a large cat growl more of a very large dog. My wife at that point hadn't heard the growl, neither did Oskar.

Further down the hill about another 50 yards another loud growl came from the trees, this time my wife shouted did you hear that? I said lets get back to the car and we quickly walked down the hill to the car. Suddenly to our horror we found that whatever was making the growling sounds had beaten us to the car and was now in the trees directly in front of us, making even louder growling noises. I told my wife to quickly get into the car and i dragged Oskar to the back end and put him in the boot.  It was at this point that i was truly scared as I looked around for some large stick to fend off whatever it was to my mind was about to spring at me from the trees.  I got into the car and breathed a sigh of relief. Whatever it was had stalked us all the way down the hill for over 300 yards and by the sound of the growl was extremely large. I have read lately that apparently American Bigfoot have been known to mimic animals, even humans.

I remember a story on the local news of someone discovering a tent in the Simon side forest that had been left hastily with expensive equipment laying around, it was thought that someone had had an accident, and the mountain rescue team had been sent out to look for them.  After two days somebody phoned the Police and said it was their tent and equipment, they had been scared after hearing frightening sounds in the forest that caused them to panic and run back through the woods to their car. The story appeared on The News at 10 and several daily newspapers at the time. 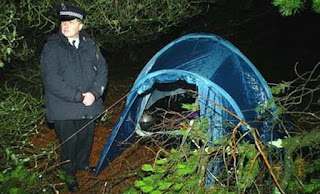 Anyway that is my story, was it a Woodwose or Bigfoot trying to scare us away? who knows what it was. I don't fully understand why our dog Oskar didn't hear the growl or sense that something was there, he is usually very alert.  So if you go to the Simon side hills in Northumberland take a big stick with you, or better still go with somebody that cant walk fast so that whatever it is up there will get them first.

I wish that I could have seen whatever it was, but from the safety of the car. Have you ever heard of instances in the UK of people experiencing growling sounds before? I just want to make the point that whatever it was was very big and the sound it made seemed artificial, if that makes sense. I have never heard anything like it in my life except on a visit to the zoo.