January 19, 2016
One night my friend and I headed out to walk my dog, it was a summer evening but fairly late so it was getting dark out. We turned down the street which now ran through Walker's Farm and had no intention of crossing over onto the remains of the farm. Instead we followed the road all the way through which took us to a very badly lit bike path. The path ran through a wood of pine trees, they were densely planted and you could see no further than a couple of feet in front of you. My dog, Nyla, was hesitant in walking down this path, pulling backwards and whimpering. She stalled what was no less than a dozen times until she gave in and literally pulled us through as fast as she could. We could see the exit of the track, thankfully, and as we approached it we heard a very loud cracking noise above our heads. My friend, Nyla and myself were all startled. Looking up we saw the tree top shaking. This was not caused by a bird or any small critter, there was no wind and the neighbouring trees were still. We heard another crack, and another, and we watched as the entire tree shook from top to base and heard each branch snap as something fell from above our heads. Eventually we heard an almighty thud as something hit the ground right next to us, only we saw nothing.
Whatever it was was not visible but it shot off and we watched the branches move as it ran through them into the darkness. All of this must have only lasted a few moments and we ran off in the other direction as soon as we could move our feet.  Months later a friend and I had gone back to Walker's Farm,  It was late, around midnight, we were nowhere near the entrance to the farm but we heard a distant clanging sound. We could only describe it as metal on metal, as if a blacksmith was hard at work. We were both aware of the sound but figured it must have been coming from a distant garden or garage. The closer we came to the farm the louder it got, so loud it disrupted our conversation and we became curious of the noise that was now obviously coming from the farm. We both decided to walk to the top of the hill and when we reached it we were sure the noise was coming from inside the hut I mentioned earlier.
We were both confused at this point because we had both previously visited the old hut in daylight and there was nothing but old debris scattered around the floor, no lights were coming from it, it had no windows and it was hard enough to see in daylight so we imagined it must have been the epitome of darkness in there. We decided to go onto the farm, and get a little closer, purely driven by curiosity. We must have been one hundred yards away from the hut when all of a sudden the noise ceased. We stopped in our tracks and moments later we were both aware of something peering out from one of the tunnels, it was a dark figure but there was enough contrast to set it apart from the darkness of the farm. It was not a man, and I do not believe it was even human. The feeling I had was enough for me to be sure of that, terrified does not come close. We were stood there and we watched as it went back in and came back to peer around the corner at us a number of times. It was bigger than a normal man, it had a shape but I cannot say it was the silhouette of a human being. Its head was a very strange shape.  In hope of a reply my friend called out to the dark figure but that only made things worse. Another dark figure appeared at the feet of the first, it was peering at us just like the other, only this one looked much more animalistic. It was crouched over, on all fours, but again I cannot say for certain that it took the shape of anything I had seen before. This silhouette made a noise only describable as a snarling, growling, angry noise, but not that of a dog of any kind. At this point we fled, running back to the hill and over it as fast as possible. When we reached the street lights we looked back towards the hill to see the first figure stood watching us. It never left the grounds of the old farm, but it followed us along as far as it could go, we saw its head bobbing up and down amidst the trees. This drove us both to tears, that is how scared we were. 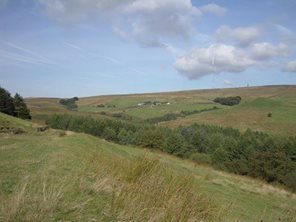 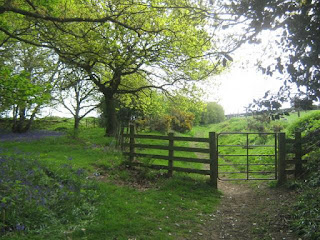 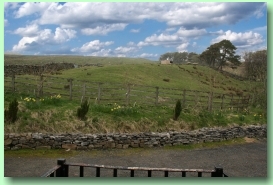