March 08, 2016
One story related to the author of 'The Big Grey Man of Ben MacDhui', a man called Richard Frere. He told of a friend of his who decided to spend a night camping on the top of the mountain in 1940. In his tent near the cairn he began to suffer a feeling of morbidity and a sense of unreality but finally fell asleep.
He woke up with moonlight shining through a gap into his tent and suddenly realized that he could see something brownish between himself and the moon. Horrified, he froze, and waited for the thing to move away. When it did, he looked out into the brilliant moonlight and saw a large brown creature 'swaggering' away down the mountain side. He said the creature had 'an air of insolent strength' about it. Incredibly, he estimated the height of the thing to be twenty feet, and described it as having an erect posture, broad shoulders and a tapering waist. 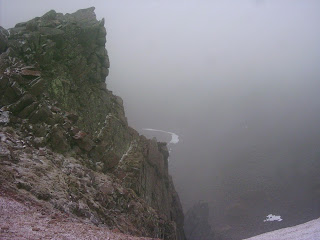 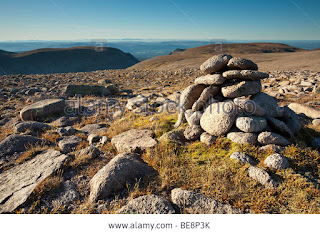 Another Account from Ben Macdhui
During the World War II, Peter Densham was a mountain rescue worker, locating and saving pilots who had crashed in the Cairngorms. One day he was at the top of Ben MacDhui when a heavy mist started to fall. He sat and waited for conditions to improve. After a while he began to hear strange crunching noises and suddenly felt a presence close by. He stood up to investigate, but was immediately seized by a feeling of panic. Before he realized what was happening, he was running down the mountain, dangerously close to the sheer cliff edge. He said afterwards 'I tried to stop myself and found this extremely difficult to do. It was as if someone was pushing me. I managed to deflect my course, but with a great deal of difficulty.' Densham would later state "...tell me that the whine was but the result of relaxed eardrums, and the Presence was only the creation of a mind that was accustomed to take too great an interest in such things. I shall not be convinced. Come, rather, with me at the mysterious dusk time when day and night struggle upon the mountains. Feel the night wind on your faces, and hear it crying amid rocks. See the desert uplands consumed before the racing storms. Though your nerves be of steel, and your mind says it cannot be, you will be acquainted with that fear without name, that intense dread of the unknown that has pursued mankind from the very dawn of time."

The footprints were seen and the photographs published by John A. Rennie in his book Romantic Strathspey, and the prints he found were in the Spey Valley some 15 miles away from Ben MacDhui. The prints:

...were running across a stretch of snow covered moorland, each print 19 inches long by about 14 inches wide and there must have been all of seven feet between each "stride". There was no differentiation between a left and a right foot, and they preceded in an approximately single line