August 18, 2016
Dartmoor National Park is a vast moorland in Devon county, in southwest England. Ponies roam its craggy landscape, defined by forests, rivers, wetlands and rock formations (tors). Trails wind through valleys with Neolithic tombs, Bronze Age stone circles and abandoned medieval farmhouses. The area has a handful of villages, including Princetown, home to Dartmoor Prison, used during the Napoleonic Wars. A beautiful and amazing place it is also a vast habitat for some of Britains many animals and birds, Though stunning in the day time, at night the moor can become a scary and dangerous place, there are many old tales of people wandering off into the night, never returning, and ghostly tales of highway men and smugglers den's pass down from generation to generation. But of even more interest to me are the story's of strange creatures encountered and never forgotten. Two of these accounts appear in the book The Wildman by British Cryptozoologist Nick Redfern and i shall start with these.

The Postbridge Apeman 1967:   Bob Shenton saw 'something bloody odd' on the wilds of Dartmoor back in the winter of 1967. He was driving across the moors late one night - at the time he worked as a plumber and was heading to a house to deal with a case of a burst water-pipe - and, while near the village of Postbridge, came across something decidedly strange. According to Bob, for the very briefest of moments, and as he approached Postbridge, he caught sight of what looked for all the world like a large ape-like figure crossing the road in front of him and vanishing in the shadows at the edge of the road. 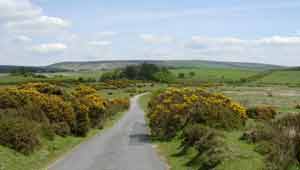 The Dartmoor Two Legged Thing 1991:  Many years ago (1991 to be as exact as I can) I was on Dartmoor in the small hours, location forgotten but I recall being sat with the girl I was sort of seeing at the time and we were located at the back of some public toilets (yeah, I know, real romantic but it gave us some privacy) and before us about 200 plus meters away was a lake. As we were sat having a smoke I noticed a shape moving around down at what I believed to be the lake shore, it was night but the moon was bright so you could make out shapes and form but not features, anyway my brain first kicked in as to the fact that it must be a diver and it was late to be out diving, then I realized that this "person" had no lights about them to see where they were headed or, if they had been diving, to see underwater. The form was definitely walking on two legs, that was apparent by the way it moved, but it was silhouetted against the lake so I could not make out features, being the inquisitive creatures that we are I began to move towards the shape, then I realized that whoever this was that was perhaps not the best idea, the form was still I assumed at or near the lake shore and seemed to be moving slowly not towards us but diagonally away to our left when the girl I was with suggested we should go I agreed that was a damn good idea. The form itself was bulky but as to actual height etc. I could not absolutely say, I just got the feeling it was large, the thought occurred to me as we were leaving the area in my friends car that perhaps it was a bigfoot, that is all my mind could relate it to after ticking off the other options like an escaped prisoner from Dartmoor prison, there were no reports from around the time, a diver, at that time of night and with no lights, there was no other car in the small car park either for the diver to make his way to which also negated the possibility that it was another courting couple or someone out for a walk. There was another couple with us that night, but they remained in and around the car, and besides neither looked like the form that we saw. Witness: John Cameron. 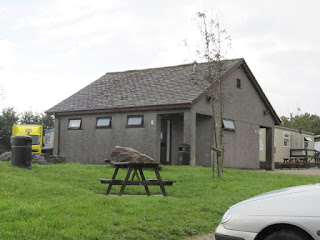 The Wildman Captured on Dartmoor 1948:  Dartmoor 1948 - Possible capture - While working as a nurse at the Royal Western Counties Hospital, Devonshire, in 1982, Britain’s leading cryptozoologist Jonathan Downes (of the Center for Fortean Zoology) was told a strange tale by one of the staff doctors who, at the time, was then approaching retirement. According to the doctor, he had been on duty one morning in the winter of 1948 when he received several unusual telephone calls from local officials, and all informing him in a distinctly cryptic manner that a highly dangerous patient, who had been captured on the wilds of Dartmoor, would be brought to the hospital within the hour, requiring specialist care and an isolated room. Within 45 minutes a police van arrived at the hospital and backed up to a side door. Seven policemen jumped out of the vehicle while simultaneously trying to hang on to what the doctor said resembled a hair-covered caveman. The policemen dragged the creature along the hospital corridors and into the already-prepared isolation room. The door was quickly slammed shut behind it. The beast stood slightly over six feet in height and was completely naked, with a heavy brow, a wide nose, and very muscular arms and legs. In addition it was covered with an excessive amount of body hair that enveloped its whole body apart from the palms of its hands, the soles of its feet, and its face, and had a head of long, matted hair. Over the course of the next three days, telephone calls bombarded the hospital from the police, the Lord Lieutenant of the County, and the Home Office in London. Then came the news that the man-beast was being transferred to a secure location in London for examination. Again late at night, the creature was removed from the hospital by the same group of policemen. This time, however, they succeeded in holding the thing down long enough for it to be heavily sedated by the doctor, whereupon it was tied with powerful straps to a stretcher and loaded again into a police wagon with an unidentified doctor in attendance for the journey that lay ahead. Less than 20 minutes after they had arrived, the police departed into the night and the creature was gone forever. 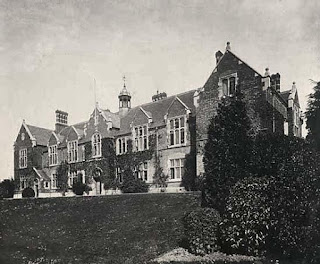 The Wistmans Wood Wildmen Creature;s 1990's:  Wistman's woods on dartmoor is a very nice place many years ago i learned that dartmoor was originally covered in miniature oaks , which brought me to research the area its self . as a avid fan of the unknown i started looking and researching , on many camping trips there as a young one i used to find strange structures made from rocks and wood eg : a design like a mounding grave , lean twos and also trees bent in to to form a x shape . i have also been and looked around the caves in and around wistman's wood i dint not stay in them for very long as it felt like i was being watched , later in life i started to think about these things and read reports on forums and webpages about wild men living on the moorland ( Bigfoot). many people think of me and others that research and have had in counters raving mad , as a child and teenager i have had many dealings with strange going on's on dartmoor things i cant explain , being watched and the feeling of something being near,, dartmoor is a very wild place and could hold more then big cats etc , you never know wot or who is out there. 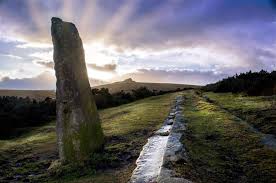 These few sightings are all within a short walk of each other and only represent a portion of the sightings from the Devon area. But clustered so tightly together and spanning many years, the reports have enough similarity to suggest "something two legged and apeish" is roaming the moors at night, and know doubt more to come.