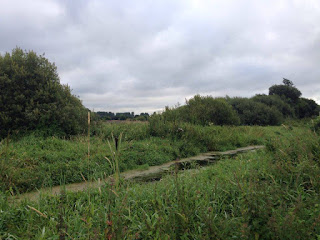 I would like to report an experience that happened to me just last month, i was unsure about coming forward, and to be honest i still am, I was in Brackagh which borders a road and is near human habitation in Co Armagh, I was out as i like to walk and I was exploring an old stomping ground of many years from my youth.  Back then the area was different, as this area is now a nature reserve and is used by dog walkers now on a loop walk trail, you can leave the trails and paths but i doubt anybody does.  There are seven peat rompers and I walked three or four of them at least that day, so id been out for quite some time.  As I walked the loop that was the farthest from the road, I was walking close to the edge of an adjoining field and when i passed a certain spot I heard the unusual cry of an animal.  It wasn’t something i could identify, but it sounded in distress, I walk very quietly by the way so i don't think i made any noise on approaching that area, or spooked anything?  I stood and watched, listening to see if I could see where this sound was coming from or its source. I  could pinpoint the area but not the source. I kept looking around trying to see what “it” was but i couldn’t identify anything, and as i walked on my way i was still looking.   I did notice a lot of the trees and they had been drilled and a PVC capsule inserted. This I presume was to kill the tree and roots? Why I don't know as I dug one out with a knife to examine it.  These capsules were in lots of the trees around me as i passed by, there were trees with capsules everywhere? 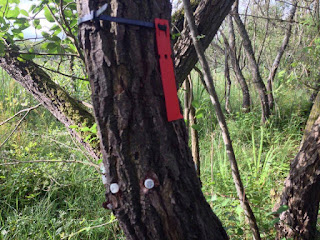 Anyway I walked up a long straight part of the walk and without warning instinct told me I was being watched, i wasn't scared and was at ease but i knew something was watching me walk by.  I turned around and saw a large black figure just standing there watching me, back at where I had stopped at a junction on the path to listen to an animal in distress, but could not see.   I looked and the figure stood still and was watching me.  This was not a dog walker and my car was the only one in the car park when I left and no one followed me that I do know.  This figure was jet black and 6-7 ft tall.  It didn’t do anything, it just stood watching me up the trail, i looked at him and he just looked back.  As nothing happened and I was not a close threat i decided to put some space between me and the figure in the trees, and as I had moved off I went off track exploring, as I broke through vegetation and areas not walked before I saw some flat areas where something large had bedded down or sat?  Strangely I was not afraid but more inquisitive to know more.  I did keep checking behind me but saw nothing more.  I have seen a few areas where a large animal bedded down like a deer up and around mountains regularly.  But these were much larger than the deer beds. 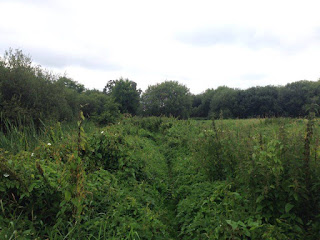 At this point I should say no large animals wander here that i know of and there are no deer. I am telling you this as it happened a few weeks ago. I will post a few pics here from along my route, it wasn't an easy place to navigate and I would have gotten lost where I was in the trees, ferns, brambles and peat bog only for my gps when I went off track.  The arrow cursor is where the black figure stood as I was up at the top right looking back down the tree lined track. Date 9-8-17

Whilst chatting with the witness i asked him how he felt that day before and after seeing the figure? You asked me how I felt that day? Well i was walking alone as I have done for years as I enjoy the quiet and natural sounds of nature.  Not to sound corny but I was at one with nature and in a very content and happy state of mind. Happy to see my boyhood surroundings yet a happiness tinged with sadness also to see the trees drilled with poison, at the same time as I felt concerned for the area and the current environment in which I walked, seeing the trees damaged and knowing there are lots of  changes I could do nothing about. I was feeling lots of emotions to be honest.  After listening to the animal sound and seeing the PVC capsules I moved on and that's when I felt I was being watched.  I was not alarmed or frightened, it was more a state of wonder, as I thought ‘why was I being watched and by what? Whatever he was, he was calm, just standing looking up the long peat rompers track.  I just thought if my time is up it's up, as I would be no match for the large figure I had seen. It wasn't a human or a dog walker or anything like that, the figure stood out as large and broad and dark in colour.  I hope this gives a better insight to my thoughts and feelings that day. 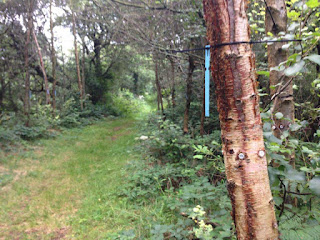 Would it be wrong to say that two minds were walking the nature reserves grounds that day, two minds, worlds apart, with perhaps the same thoughts milling through them, a place enjoyed in youth for its beauty and bounty, revisited in maturity only to find so many changes, some good some bad, but changes all the same, sadly only one has the option of getting in the car and returning to the life he chose for himself, the other? Well who knows?