January 15, 2018
West Midlands, UK.There is a pub in Smethwick, just outside Birmingham, in the West Midlands, England, called the Blue Gate and late one night a gentleman was driving a pony and trap on Rolfe Street, Smethwick, he was riding along thinking of home, when he heard some strange noises coming from behind him. 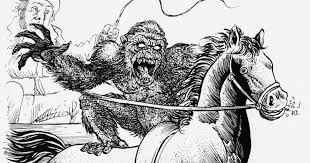 It was at that moment and without warning when suddenly, a weird-looking animal leaped out at him, he fought it off with his horse-whip after a struggle.  The man rushed home, and told this tale of the black beast that attacked him to his wife and neighbours, at which point the neighbour said “tis just thy man monkey, t’as always been by the big bridge” and so the man monkey legend began.
The creature it is claimed was killed, placed in a glass case, and displayed in the Blue Gate pub on Rolfe Street for some time, where the locals dubbed it ‘Old Ned’s Devil’. Sadly, however, this mystifying specimen apparently vanished years ago, and nothing more is known of it.

Join BBR Today and help us to investigate these cases, or join our online community for online chat, podcasts and live feeds. debbiehatswell:gmail.com

Until Next Time,, Deborah