November 09, 2015
Caroline Toms, 34, managed to take a grainy image of the huge ape-like beast that she claims ran across her path as she was with border collie Ash.
Ash was the first to spot something was amiss last Tuesday as they walked through Angmering Park Estate in Arundel, West Sussex.
Caroline, from nearby Littlehampton, said: "It all happened so fast. Ash started acting a little bit bemused and barking.
"Then she quick as a flash shot off into the undergrowth - then I saw this big black thing flash out in front of me.
"I only had my camera out because I was taking pictures of Ash playing.
"She came running back quick as a flash though.
"I don't know what it was, but when I had a closer look at the pictures, it certainly does look like Bigfoot to me."
The building society worker said the incident was over in seconds, and she has no idea what it is that she photographed - but won't rule out the mythical North American ape-like creature.
She said: "I posted this photo I took last week on my Facebook page and one of my friends suggested I contacted the paper.
"I took it whilst walking my dog through Angmering Park Estate last week.
"I have no idea what it is, but I wonder if anyone else has seen it."
The Angmering Park Estate is a private nature reserve set in the heart of the South Downs National Park, and covers a whopping 6,750 acres - the equivalent of 3,375 football pitches.
Caroline said: "I think it could be Bigfoot, but it happened so fast I cannot be absolutely certain.
"It was just luck I had the camera out.
"It was so big and massive, I don't know if it could be anything else.
"That's what it looked like - I don't know for sure, but I've seen other pictures of supposed Bigfoot, and what I saw looks like the other ones."
The Sussex Big Cat Watch is a group that claims there has been 'countless sightings' of a puma or leopard over the years.
Among them, they say, was back in September 2009, when a walker saw a big black cat the size of a small Labrador walk in front of him on the edge of a dense forest.
Angmering Park Estate say they have never heard of any Bigfoot sightings, but the park is so massive they have no idea of exactly what lives in their grounds.
A spokesperson yesterday said: "We haven't had any reports of this before. I've never heard of it.
"It's a massive estate but this is the first we have seen of any Bigfoot-type 'things.'"
Noted Big Cat Expert Derek Bilston is convinced there are big cats on the loose in Sussex, but does not know what Caroline's picture could show.
The leader of Sussex Big Cat Watch said: "I'm convinced there's big cats in Britain and one or two in Sussex.
"They may have been pets set free or native to this country, they're not all that big, not as big as a lion or tiger so they could quite easily be well hidden.
"I've had very reliable people come to me with good descriptions of these cats. I've even had a policeman contact to say they've seen one, why would a policeman lie?
"When I advertise I get around 50 sightings a year, otherwise I get at least 20 or 30.
"In the last two weeks I've had sightings in East Sussex which were reported to the police and the RSPCA, I'm trying to follow them up."
Another big cat expert however, reckons the grainy picture is a man in a suit.
Danny Bamping, a spokesperson from the British Big Cat Society, said: "That is a bloke in a suit one hundred per cent.
"I have been doing this for 20 years and I know for a fact that it's not a cat - or Bigfoot - it's a hoax." 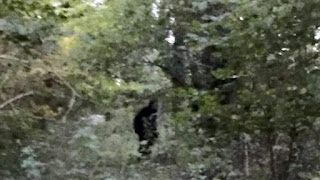