What To Do About Thetford?

Thetford Forest and the surrounding woods and countryside are a popular area for people wanting to get out and about and enjoy nature, with the Little River Ouse running alongside and plenty of birds and wildlife it is an area of the UK that has a lot of visitors.  As people come to admire the Forest and her animals, some get a little more animal interaction than they were expecting.

From as far back as the 1970’s there are reports of a “bear like Creature” that roamed the woods. As hard as that is to believe, the sightings are still coming in, sometimes described as bearlike and other Monkeyish i’m not to sure what they are seeing.  So i shall leave it to you, to decide for yourself.

This sighting comes from an unnamed witness who saw a strange hominid while driving along the A1075 between Thetford and East Wretham.

This strange, shaggy haired creature was mistakenly thought by the witness to be an escaped zoo animal, but as you will see from their description, this was anything but.  The witness was driving home from the direction of Watton, towards Thetford along the A1075, when they saw something odd and hairy. Whatever it was was walking on all fours and the witnesses likened it to something like a massive dog. It had greyish white hair, small ears, a face with a sort of snout, and big eyes. The witness drove past the mysterious creature to get a better look, at which it stood up on its' legs, erect and bipedal like a man. The witness then claims it was human-like in shape and was around seven foot tall. Scared, the witness drove away quickly. When they returned to the spot a few days later, there were drag marks in the ground as if something had been pulled along. What was this? Had the creature been eating at the time? Had it dragged its' prey away when it had been disturbed?

Almost 30 years after the first sightings, another witness saw a similar creature in the same general area. They described it as having grey hair with dark black patches.

Me and a friend had got up at first light,packed up and was on the move just after sun rise,as we strolled along my mate suddenly stopped and said 'can you see that?' i looked over to where he was pointing and saw something looking back at us across a small clearing,it stood about 7ft tall and all i can describe it as is 'not of this world' (am getting goosebumps while i'm writing this)we sort of calmly walked off at a very fast pace without looking back.to be honest i sometimes get the creeps when im camping out at night remembering it. and no we hadn't been drinking.

A lorry driver reported seeing a hairy, light grey creature on all fours moving through grass around ninety metres away. The driver could see the creature had forward facing eyes, a long snout, and upright ears. The creature then stood on its hind legs and approached the driver, moving like an ape, before dropping once again to all fours and running off, peering over its shoulder as it left. 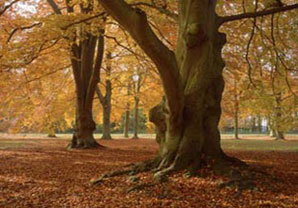 As we can see from the reports Thetford Forest is a place of high strangeness, anyone willing to stay the night, gets a medal in my book.