“The first was alone, heading over MacDhui for Corrour on a night when the snow had a hard, crisp crust through which his boots broke at every step. He reached the summit and it was while he was descending the slopes which fall towards the Larig that he heard footsteps behind him, footsteps not in the rhythm of his own, but occurring only once for every three steps he took.
“I felt a queer crinkly feeling in the back of my neck,” he told me, “but I said to myself, ‘This is silly, there must be a reason for it.’ So I stopped, and the footsteps stopped, and I sat down and tried to reason it out. I could see nothing. There was a moon about somewhere, but the mist was fairly thick. The only thing I could make of it was that when my boots broke through the snow-crust they made some sort of echo. But then every step should have echoed, and not just this regular one-in-three. I was scared stiff. I got up, and walked on, trying hard not to look behind me. I got down all right – the footsteps stopped a thousand feet above the Larig – and I didn’t run. But if anything had so much as said ‘Boo!’ behind me, I’d have been down to Corrour like a streak of lightning!”
The second man’s experience was roughly similar. He was on MacDhui, and alone. He heard footsteps. He was climbing in daylight, in summer; but so dense was the mist that he was working by compass, and visibility was almost as poor as it would have been at night. The footsteps he heard were made by something or someone trudging up the fine screes which decorate the upper parts of the mountain, a thing not extraordinary in itself, though the steps were only a few yards behind him, but exceedingly odd when the mist suddenly cleared and he could see no living thing on the mountain, at that point devoid of cover of any kind.
“Did the steps follow yours exactly?” I asked him. “No,” he said. “That was the funny thing. They didn’t. They were regular all right; but the queer thing was that they seemed to come once for every two and a half steps I took.” He thought it queerer still when I told him the other man’s story. You see, he was long-legged and six feet tall, and the first man was only five-feet-seven.
Once I was out with a search-party on MacDhui; and on the way down after an unsuccessful day I asked some of the gamekeepers and stalkers who were with us what they though of it all. They worked on MacDhui, so they should know. Had they seen Ferlas Mor? Did he exist, or was it just a silly story? They looked at me for a few seconds, and then one said: “We do not talk about that.” 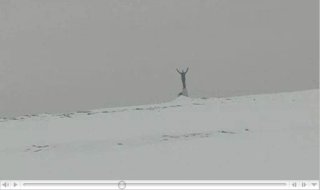