September 22, 2016
Thank you to Daphne for allowing ‘British Bigfoot Research’ to share her grandfather’s sighting in the New Forest in Hampshire. This is the story in her own words:
‘The New Forest in Hampshire, where my Grandparents took us picnicking when I was a child (I am 67 now)...Grandpa told my brother, sister & I "not to wander too far off, I've just seen what looks like a big black Gorilla, like Alfred (Alfred was the famous London Zoo Gorilla at that time)...Granddad was off taking a pee in the woods, he came back & warned us 3 kids to stay close to the family. It was after we had a drive from the Dormy hotel/restaurant... We now know that he must have seen a Bigfoot, and it may have thought Gramps was 'marking his territory'’
Thanks again Daphne for sharing with the group.

Although Daphne now lives half way around the world this account from her childhood clearly had an affect on her, on checking the map, the area around this account has many other strange sightings around it. 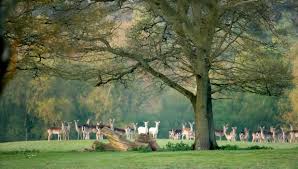 The Woodmill Hairy Creature:
Witness Account: Ok im going to tell you a story that's true, my son has never put it out there nor has my ex partner, and i was not there, so this is what they told me. my ex partner was the security guard for Woodmill. Southampton, Golf course, my son had joined him at work that night and they also had our two dogs (both security trained and will attack on command) with them, they were patrolling the area with the dogs on the lead, they both heard noises in the wood line an presuming it was deer or another animal they continued to walk and patrol the area. as they were passing a clump of bushes, the dogs started to go mad, barking and snapping and pulling on the leads and running at the bushes, at which point, something they can not describe, made a horrid howling screech and set off running towards the wood line, the dogs in hot pursuit. As the dogs got into the woods, there was a yelp and both dogs ran back the way they had come straight to my ex partner, one of the dogs was clearly injured and was limping badly on one leg, off into the woods they heard a splash in the stream as if whatever it was had jumped in. they described the creature as around 61/2 to 7ft tall, really hairy, dirty and unkempt, they have only really only ever told very close friends up to today, but my son is 27 now and we were together the other day and it was mentioned again. and i remember at the time, when he came home he was as white as a sheet and quite ill looking. it was atleast a week before the dogs would return to the area and they were all shaken up quite badly. and my son has never returned to the area.
There are abundant food sources in the New Forest and the over population of wild boar, lots the area is 571 km square and seem to be hiding more than we know. 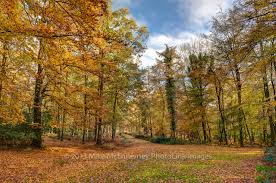 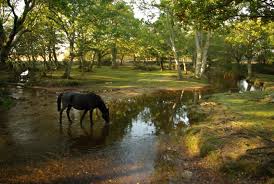