June 03, 2015
helmsley wolf man: witness report 2012
My experience goes back to two years ago in north yorkshire to what only can be described as seeing a werewolf. Im a logical person, to me they are something from horror films and science fiction and dont exists but after hearing what i heard and then seeing it - I know believe different. Ive googled ever since to see if anyone has seen anything in that area but never found anything. It's the first time Ive posted as obviuosly posting Ive seen a werewolf leave my post open to ridicule. Put it this way I wont camp out on the moors again. I went for a walk outside my motorhome and can only describe what was blood curdling howls exactly as you would imagine from a movie. I heard them to the side of me so decided to walk back to my van then the howls were in front of me so yes i started to do a fast walk then i saw the shape of something shaggy on two legs it was behind my motorhome stood up. It was about 6ft tall shaggy with glowing red eyes and stood on two legs. It was not a dog far too big . Ive had dogs all my life never heard a howl as deep or loud , plus Ive never heard my dogs howl. There was no one around for miles a pretty remote place no animals , no farm animals. It was exactly as you would imagine from the horror movies but I didnt see it close up instead I legged it as fast as i could. I saw the shape of it from a distance I heard it following me and to the side of me so it moved pretty quick. It was wandering outside my van for a while a good 20 minutes, it sounded like it was underneath. To be honest I sat in there quiet and was too scared to look out the window . No one was playing a prank. In the morning nothing , no evidence. I went to the spot where it would have been stood that where I get the estmate it was 6ft .I had lit a fire earlier outside im presuming seeing a fire in the middle of no where attracted it. It was foggy , wasnt camping season only me out there in a campervan. no foot prints around the van in the morning nothing. 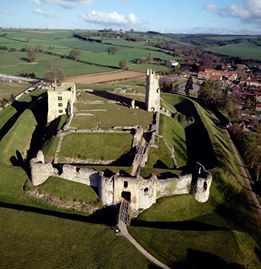 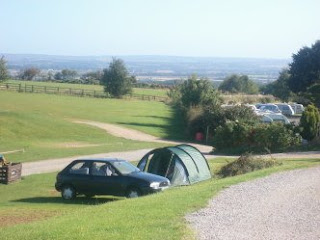