I was discussing areas and researching tips with a fellow Wildman researcher (we have been chatting on and off for a while now and looking at suitable places to visit) when he stumbled upon his own experience and he has allowed me to share it here.

There is area close to me, that i feel is important to the forest folk and a hidden gem in the Urban Jungle of the North West of Britain.  Tucked away are many little pockets of unused land, thick with shrubs and trees, left to nature and seldom visited by man.  We call these the green corridors and it was whilst chatting between ourselves, we decided on this exact spot as we both felt it had the correct “feel” to it, and all the things we look for when out, cover, food sources, and water and probably an isolated area not frequented by humans at night, this is what he had to say. 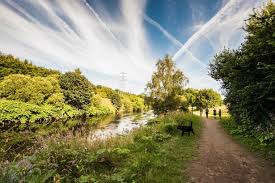 I went to Area A today it was very wet as it had been raining for the past 48hrs, but I'd had a busy day in town and needed to clear my head, so i set off with my young son for an hours peace and quiet.  We were out for a while in the rain just enjoying the day, when i noticed out of the corner of my eye a Grey Figure, only for a split second and it was gone, but i made my way over to where it had been standing and saw to my shock there was a ditch and the “figure” must of been 8ft tall for me to have seen him, as i went to point this out to my son, there was high wail, and the crows set off in unison. My said he had also seen a figure too, but on comparing notes i realised the figure he had seen was dark and smaller?  The crows made a ruckus and we set off back to the car, not scared but a little confused and the adrenaline was rushing. 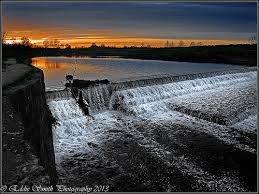 The area itself was off the canal and wooded, not quite dusk and although wet and misty i had good light as it was only around 5pm, i found a spot within the small wood, where a circle of pine trees grew, in the middle of the circle was this tree, just there by itself, this little spot felt magical in a way and the tree seemed significant or important to me some how, and i did feel watched like lots of unseen figures were around me, and it felt like they were just moving silently all around us, although i couldn't them it was something i felt strongly about, neither myself or my son felt in any danger and to be honest it was an uplifting experience. 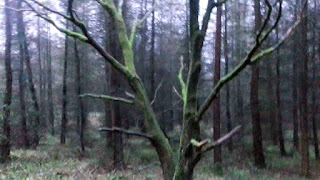 I will be returning to the area again and hope for many more interactions.