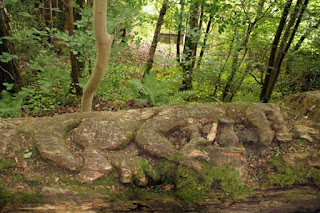 Isabella here from the high hills of Scotland.  I thought I’d try to provide another update as winter closes in.
The local shoot has been in the fields every day since last week – except in the pouring rain when they had to stay by the fire.  So it’s not a time for bigfoot – or me for that matter – to be out and about.  The biggest news from this site is that the landowner in our area, [who had his fences torn down if you recall], has apparently decided it was a fluke or random vandalism and is replacing them all.  I can only predict that next March they’ll be gone again when the clan demand their territory and the right to roam once more.  I suppose we’ll see who wins out.  But I know who I’m betting on anyway. 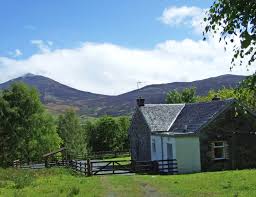 Meanwhile, I thought I’d report on an encounter with a fleeing herd of red deer that happened last spring and might interest your listeners.  First, it’s important to say that in this area, we seldom come across the stags.  They seem to inhabit the loftiest areas.  The hinds are regular visitors in the lower hills though.  We see them and their young all the time, a few here and there and mostly at night.
In general, sighting deer is a fairly leisurely event.  They may be prancing down the road, grabbing at low-hanging foliage when the car’s high beams glance off their wide eyes, reflecting back an intense golden light.  Locals always give the deer plenty of time to find an escape through hedges or over a wall.  A fairly routine and lovely part of countryside life that we all treasure.  So, until recently, I’d never witnessed an entire herd charging as one body in a panicked get-away.
Returning in the car from a weekly grocery shop, cruising along the back roads, I slammed on the brakes to make way for the Highland equivalent of an out-of-control big game safari. There must have been forty wild-eyed, foaming, panicked red deer pelting in a hell-bent pack across the road, several stags among them.  Dropping from a high field onto the macadam at a frantic pace they hit hard ... slid ....recovered ....then leapt one by one over a four-foot stone wall above a steep embankment.  In near free-fall they careered onto a narrow riverside slip of land.
There they piled up into a milling throng, just short of the water’s edge:  out of territory and completely hysterical.  The rapids in that spot were running high that day and there was no chance of swimming across.  A few at a time, they turned and faced back up the hill, alert, nostrils flared.  Every one of these animals was a healthy, mature and perfect specimen. Except for the terror in their eyes, it was a thrilling sight to see at close range. 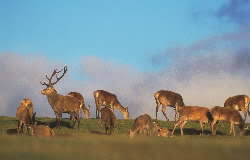 Not sure what else might happen, I pulled off onto the verge and watched, trying to imagine a pursuer who could terrify a herd of this size, who was large enough to bring them all at once from their usual retreats far above the line of mist that sat along the hills.  But this wasn’t hunting season and Scotland has no real predators, which is what allows the throngs to grow to such a size.  So who or what could be in pursuit?  In fact, every year the local landowners are given a list of how many deer they must cull because, without some method of control they’d soon consume every available source of food and starve.  Our local laird shoots at least three dozen a year, selling them off to a gourmet larder.  But not in May.
So – no hunters.  No predators.  What was afoot?  I rolled down the windows and listened. The herd were breathing hard, frozen in time, stock still.  By now it had occurred to me who we awaited; who had the size, the need and the athleticism to push a great herd throng of wild creatures to this point, at such a speed and in terror of their lives.  But big foot held back. Five minutes went by and then another five.  Still wary, the deer began to cast about for an escape route.  The largest stag took the lead and they headed out along an increasingly narrow spit of grass.  Some distance along they found a shallow bit of river and waded across to a huge area of open land – the town golf course.
Big foot had lost his catch.  Or maybe he had one in his grasp somewhere out of view.  In any case, there were, no doubt, some very shocked golfers that day.  At that I had to smile as I started up the car and drove off.
The other story in this edition of my journal is taken from ancient legend – but about a place that still exists.  The first time I’d heard this story I interpreted its meaning like everybody else -- as magical or inexplicable.  But after sighting a bigfoot in Scotland last year and realising how long they’ve been in this part of the world, I view this tale now in an entirely different, and practical, light. 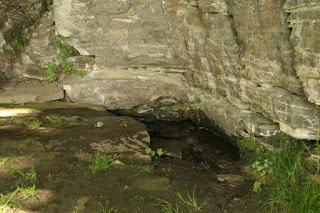 We used to have friends living in the Scottish hamlet of Weem and we went hiking in that area.  The place has a mystical reputation.  The carving of the Old Man of the Woods and the Sleeping Dragon are there as well as ancient stones with druid carvings and cup marks. Campers and Hikers love Weem’s well-kept trails and deep woods.  And at one time there was a large cave at the forest edge known as The Weem Rock. 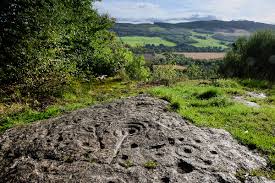 It was said by villagers in the nearby town of Aberfeldy that wee-folk and trolls inhabited the cave.  Animals that wandered up that way were never seen again and children were forbidden to go there.  Of course, once you’ve forbidden children, you know a few are going to try it.  And so they did – and disappeared; which isn’t the end, but only the beginning of a mystifying story.  The children were found on a regular basis near Loch Rannoch on the other side of Mount Schiehallion.  Schiehallion  [called the Faerie Mountain by early Scots because its surface of shattered quartz glowed in the dark] was considered magical and haunted.  It’s peppered with caves and caverns. 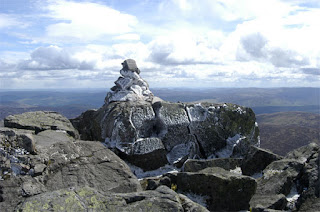 Tradesmen travelling between Rannoch and Aberfeldy would restore these missing children to their families.  No one could explain how they’d turned up so far away and in such a short time.  The children themselves remembered nothing – or so they all said.  Early on, the conclusion was that the faeries carried them there or the little people lured the children away.  Later, profuse tunnels were found leading from the back of the cave at Weem Rock to parts unknown.  No one cared to follow them to the end, but it was speculated they might extend for miles.  Some people began to discount the faerie and troll theories.  Even so, barring the idea of magic, there was no logical way the children could have travelled so far and fast on foot – nor any explanation why they didn’t get lost and starve in the miles of catacombs.  Eventually the cave at Weem Rock collapsed; some say with a significant amount of help from the townspeople.  And from there it all devolved into local mythology and hearsay around the fire.
When I heard these tales years ago I imagined what everybody does at first.  Each region has its faerie stories in Scotland.  This was just another of those.  But having seen bigfoot now, and knowing that others have as well in far-flung parts of this country, I’ve reconsidered this supposed legend and realise that a bigfoot clan might have carried children that distance in no time at all.  Their range is magnificent and their speed can overwhelm creatures as fleet of foot as a herd of red deer in full-blown panic.  I’d imagine the speculation about an elaborate system of caves and tunnels may well be true.  But with classic stoicism, the Scots have never understood – or at least never discussed – who inhabited them and why the children were supposed to stay away.  I’m afraid that attitude continues to this day.