Date: 2nd November 2016
Statement taken by Thomas john  Goodfellow:
Kiefer and Jaqueline were walking with the two dogs along the seafront, as they headed up the main ramp entrance to the sea front they were suddenly stopped as the torch light hit a large creature approx 20ft off in the distance to the right hand side in a treeline and it was running along the beach walkway,there was no sound from the creature, the only distinctive facts were it stood upright at approx 7ft - 7.5ft tall with bright white eyes after 8-10 seconds the creature moved off into the treeline and out of sight. 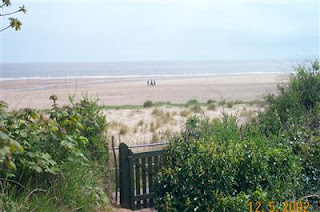 They carried on walking quickly down the seafront walkway when they heard loud sounds to the right in a few trees, they sounded like wood hitting wood. a knocking sound, so they shined the light towards the sound and saw eyes staring back at them with no movement, just a constant stare. They became so scared they started to run away picking the dogs up as they went, kiefer looked back one last time and saw a creature stood on the walkway behind them less than 15ft away, it was a dark upright figure dark brown/black with bright white eyes but lighter around the face and hands at this point they ran to the safety of home locked doors and have been sat inside ever since. 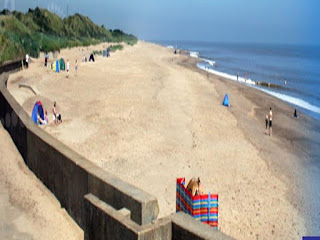 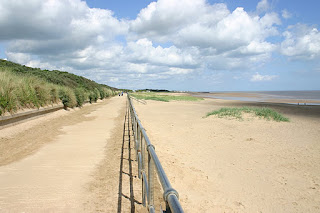