February 21, 2015
In recent weeks, we've seen some of the best ice climbing conditions in years in the west of Scotland, especially on Ben Nevis.
Day after day of gentle freeze-thaw cycles have created vast swathes of thick, sticky ice of the best quality - choking gullies and dripping improbably over steep buttresses.
The corries of the Ben have been busy with climbers seeking out these incredible conditions, and a few days ago I joined them, setting out with a good friend to climb an ice route called Comb Gully - a gully high in the corrie that's bounded by the Trident Buttress on one side and the steep walls of Tower Ridge on the other.

Several climbers reported to having heard the same distressing sound picked up by Christopher and his climbing partner Scott (pictured)
The ice was perfect and we were climbing well. I was on the the crux pitch - about 10m or so of very steep ground - and I had my back wedged against a rock wall as I placed an ice screw when I heard the first scream.
It started indistinctly, slightly muffled, but quickly came sharp into focus. It pierced through the mist - the most visceral, awful sound.
People talk about bloodcurdling screaming and for the first time I understood. That noise sent a stream of cold blood around my veins and chilled the back of my neck.
My first thought was simple but terrible: I was listening to someone who had just watched a loved one - not simply a climbing partner, but a loved one - fall to their death. There was so much pain and loss in that dreadful noise.
I froze for a moment, barely breathing, still perched on that vertical wall. I wasn't in a secure position, hanging off a few millimetres of metal hooked into the ice. At that moment I just wanted to be gone - off the climb, off the mountain.
This screaming had brought home to me the possible consequences of getting something wrong, of making a mistake. That was honestly what I'd thought I'd heard - the consequences of someone getting it very wrong and losing their life.
But there was no way to make a quick retreat - the fastest way out of this gully was up. I finished the crux and secured myself to three solid ice screws and brought my partner up.
We discussed the screams, trying to work out where they had come from, speculating on what might have happened, and agreed we needed to finish our climb as quickly as we could.
We completed the final, easier pitch, and ended up on the Ben Nevis plateau in the mist, in complete silence.
Beautiful game
I'm not sure what I was expecting, but I thought there would be some sort of noise. Something dreadful had happened. Surely we should be hearing the beginnings of a rescue - confident voices coming out of the fog.
But there was nothing - just the sound of our subdued conversation and the clinking of our climbing gear being tidied into sacks.
A brief search close to where we finished our climb revealed nothing. We headed down to Fort William.
I later spoke to another climber I knew who had been on a route in the same corrie. He had abseiled off his route and gone to investigate, but found nothing.
Other climbers did the same. Nobody could find evidence of an accident and the police said no-one had been reported missing.
So we don't know who was screaming. We don't know what happened to them. We probably never will.
But I'll never forget how a horrible scream coming out of the mist reminded me so vividly, so awfully, of the dangers of this beautiful game that we play. 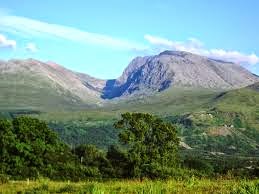