February 18, 2015
July 1994.
Local men Pete and George (psyedonms) were walking through a forestry track in woods near their home of Torphins which is situated 20 miles from the city of Aberdeen.
When nearing the end of the track Pete saw a dark figure run from the tree's on the left, across the track, disappearing into the tree's on the right. He at first thought it was a man but the figure left a strange foreboding in Pete. George did not see the figure and was busy telling Pete he was imagining things when a face appeared out of the tree's behind Pete's back. George was chilled to the bone as the face he was looking at,"looked human, but was not human." It darted away just as quickly when George threw a large stone in it’s direction. The two friends than left the area feeling somewhat unnerved.
A few weeks later the two friends along with a third, were to have another encounter with the ‘creature’ as they were driving along the road into Torphin’s, approx. two miles from their first meeting.
In the witnesses own words:" Suddenly from the side of the road there came this, great muscular, hairy figure bounding out which started to run behind the car."
" At one point it caught up and ran alongside the vehicle, not seemingly out of breath as it approached speeds of up to 35 - 40mph. "
Pete describes the creature as," ... strong and muscular...red glowing eyes...body covered in hair...about 6ft to 6ft five inches...jet black... "
The figure after several minutes stopped abruptly in the middle of the road, leaving the terrified car occupants to carry on their journey into Torphin’s alone, as the ‘creature’ faded slowly out of sight in the eerie glow of the cars red tail lights.
The same or similar ‘creature' has also been reported by a lady who lives in an isolated cottage on the edge of the forest that Pete and George first saw the figure. She has seen it on two occasions watching her house, she too describes the red glowing eyes. The only other report that I am aware of is that of a man catching a fleeting glance through high powered binoculars as it darted through a forest clearing.Torphins is a village in Royal Deeside, Aberdeenshire, Scotland which lies about 23 miles west of Aberdeen. It is situated on the A980, about 7 miles north-west of Banchory, and was once served by the Great North of Scotland Railway. Many wooded areas and also the river Dee flows through here. 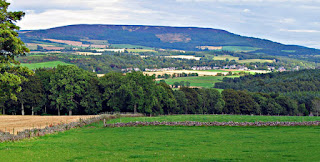 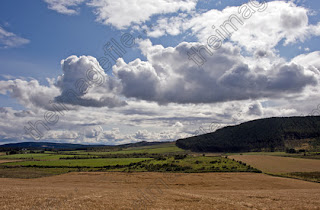 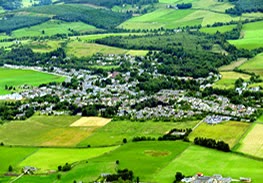