The Origins of the UK Bigfoot?

By no means are we religious people. In fact, we may ultimately be described as atheists. Stories of biblical miracles, Greek Gods and the divine have no bearing on our lives or beliefs. But one thing we do undoubtedly believe is that these stories came from somewhere, and despite their grandeur nature and inconceivable essence, they will, somewhere along the line, have a certain element of fact, verity and truth, morphing into the realms of fantasy, giving rise to the stories and legendary fable that greet us in many religious texts, over many thousands of years.

Take for example the story of the Greek God of wild nature, the enigmatic and lascivious Pan. Pan is often portrayed as being a half human and half goat, displaying itself as having the horns and legs of a goat. No temples were specifically ascribed to Pan, and people worshipped him through natural settings such as forests and caves. Legend has it that one day Pan stumbled upon an alluring and exquisite nymph named Syrinx. Pan immediately attempted to entice, charm and beguile her. But Syrinx, repelled by his ugly looks, managed to escape his advances. But Pan followed her and she had to seek help from her sisters. To escape Pan’s detection, her sisters transformed her into a reed. Then a beautiful chorus of music was emanated as the wild, blustering wind began to blow. Confused at which reed Syrinx had turned into, Pan then took nine of them and placed them side by side, creating the instrument that is now known as the nymph, and this half goat, half man was destined to play it within the forests and trees. 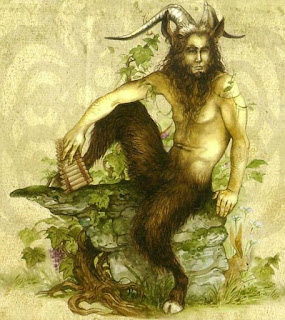 But while Pan is described as a colourful mix of man and goat in these stories, depictions of him from 4th century BC coins show him not as a human / goat type hybrid, but rather as a human-type being, looking like a hairy, unkempt wildman. What we have to take into consideration here is that, due to these early representations, could the strange goat-like God Pan have been inspired by real sightings of Woodwoses? This became more feasible and likely the more we delved.

Another fantastical figure of mythology, this time of the Roman variety, is the wild looking Silvanus, the Roman deity of woods and fields. Silvanus is similar to Pan in that he is the God of all things nature; mythological scripture states as the forests were cleared, Silvanus became a god of woods and forests. Yet again with have this mythical figure, a figure who is at one with nature and natural wooded surroundings. An ancient carving of Silvanus that we discovered was extremely interesting as it clearly shows this menacing figure as being much taller and larger than the other men depicted. He also holds a large club in his hands which coincides with the historical art and stone carvings of the ‘Woodwose’. In fact, carvings of the Woodwose put side by side with the carvings of Silvanus are amazingly similar.
There are also a number of deity’s and Gods, both Roman and Greek, that share many similarities with Pan and Silvanus, and there is evidence to suggest that all of them likely came from garbled accounts of Woodwose sightings. This also leads us onto our next celestial being, one of great significance in our story. For many years, people have often entered various churches and places of religion, looked up at the ancient and ambient stonework, and have their curious nature tweaked. For looking down upon them is a strange being, one made of stone, with ornate detail; one which looks very odd indeed among the other carvings. These carvings consist of a face , usually looking male in nature, staring down at you. This face looks human but not quite as human as you and me.... It gives you the impression that this thing is wild and untamed..... and you could almost certainly be right. For from this primitive looking being's mouth springs fourth foliage. This is the Green Man of European folklore. 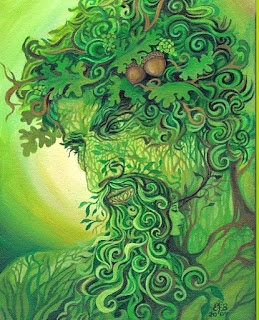 The Green Man is something of a mystery. The Green Man very cryptically sprouts its’ early roots from Roman sculptors, who first carved the human-like faces surrounded by intertwined vegetation. These early depictions of the figure head are remarkably similar to those that later and most notably appeared in ornate form on ancient churches as opulent decoration. One of the earliest examples of the foliage-secreting heads, dating back to the 4th century, can be seen in the church of St. Hilaire-le-Grand at Poitiers, France. After that, the image became a popular wall decoration all over churches and other buildings throughout the centuries. 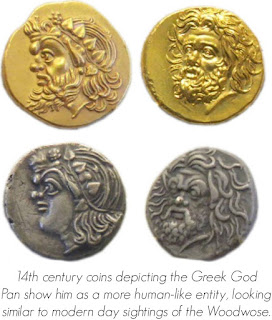 But despite the amount of them adorning the walls, the Green Man still remains a mystery. Who is he? Why is he there? What does he represent? Those are the questions that remain unanswered. In thousands of churches all over the UK and mainland Europe, there are these Green Men all over the walls, inside and out. They even outnumber the carvings of Jesus Christ! This tells us that this symbol of strangeness made an impact on people back in centuries previous. But still nobody really understands them. They are simply a conundrum. The Green Man simply exists with us, and has done for many hundreds of years. We have no way of knowing why the people put him there and what they actually knew or believed of the symbol. 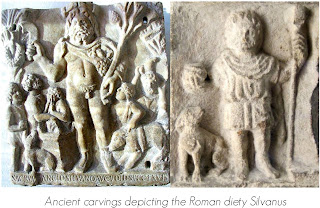 Many people have theorised as to what the Green Man actually means, and have tried their best to explain and elucidate his existence. But theories and opinions are simply just that: They are opinions, nothing more. It is all just educated conjecture and reliable guesswork. Officially nothing has been written about the Green Man. Not in the churches themselves where he is displayed or in any texts. Why is this so? Nothing from those past times is there any clue as to his meaning. This ‘being’ was carved into thousands of churches, thousands of times, yet there is nothing sufficient to explain why this was and how it came about. Was the church themselves responsible for them, and if so, why do they not write about them?

Well, maybe the answer is now available to us, if we look at it with the knowledge we have of the Wildman in Europe. The more we studied the Green Man enigma, the more we saw a close connection to what I was studying. When put simply, the Green Man is a wild-looking male face, with a beard, it’s head surrounded by foliage. Now, when we discuss sightings of the Woodwose, what is seen a lot? Witnesses of Bigfoot-type creatures all over the world have told how they see these creatures staring at them from within the trees. In some cases, the creature takes a few steps and they completely vanish, hiding naturally in the surroundings of the forests and woods. Deborah Hatswell, the Salford witness who saw a Woodwose in 1982, she told how he was simply stood, watching her and her friend from within the rhododendrons. A face staring from within the foliage…sound familiar? Yes, it is virtually identical to the Green Man carvings. Was this where the Green Man symbol came from? Was it inspired by real sightings of hairy wild-men, in our woods and forests, in the middle ages? Were medieval encounters with the Woodwose really what influenced people to carve the Green Man carvings in churches, maybe as a warning to Christians to be wary of them? Did they carve what they saw; hairy faces staring from the trees? We think the answer is yes. It is my opinion that this symbol is historical proof that these creatures have been seen and experienced for hundreds of years by eyewitnesses who had fleeting encounters with these rare and elusive creatures.