July 14, 2017
This account was brought to my attention by Michael Applebee and was printed in Fortean Times written by Nick Skerten from London: 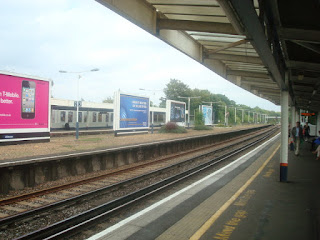 Nick Skerten:  One summer afternoon in 2007, I was returning from central London and my train had spent a few too many minutes idling at the platform in New Malden station. Lost in thought, I had been looking out of the window at nothing in particular when I suddenly saw something that made me gasp out loud. At the far end of the London-bound platform is a thick bank of trees and shrubs behind a fence. I was astonished to see what appeared to be an enormous face made up of the surrounding foliage looming out at the opposite platform and looking very similar to the typical appearance of the ‘Green Man’, as seen in church carvings. The face was about 5ft (1.5m) in diameter and about 7ft (2m) or so from the ground. 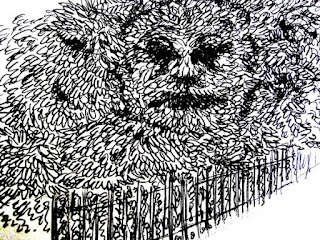 I was amazed how perfect the face seemed to be-though at the same time I knew it was just my brain demonstrating its knack for face recognition in random patterns. I probably gazed in wonder for 20-odd seconds before the most shocking thing happened.

Suddenly, and with tremendous velocity, the entire face withdrew backwards into the vegetation, which caused the surrounding bushes and trees to sway violently. Most strikingly of all, a branch that must have been under the ‘face’ swung upwards with immense force-as if a huge weight had been lifted from it-before smacking into the surrounding greenery and, I suppose, reassuming its original position. This whole motion took about a second and the face had completely disappeared! I could accept that a fox or even a human might have been sitting on the branches and had jumped off, causing them to bounce back into position, but this would not easily account for the very distinct retraction of the face, as if it was wrenched backwards into a tunnel.

The face in no way looked constructed or man-made and seemed to consist of a natural, though utterly remarkable, arrangement. The features of the thing were clear to see and I was particularly struck by the grinning mouth and staring eyes. Quite how the verdant visage was sucked backwards I have no idea. I have often wondered how, or indeed why, anyone would have achieved this bizarre effect for bored South West Trains passengers. The train drew away and I sat back in my chair feeling strangely unnerved. On all my subsequent journeys through the station I have never seen anything like this again.
I managed to get in contact with Nick to ask his permission to reproduce the letter and to see if there was anything else he would add. Nick commented that: “There was no-one near me when I saw this weird thing, which is slightly frustrating! I was travelling back from town after doing some shopping. It was a very sunny day and I suppose the train had been waiting for a good two minutes before I noticed the face in the leaves. I hadn’t been staring out of the window all of that time and it was, as I recall, the moment I looked at the bushes that I saw the face. I’ve always had a good look at that bank of trees whenever I pass through New Malden station on the train, but it’s always looked like a rather standard bush and nothing else. It was, though, the terrific suction that seemed to be exerted on the face as it was wrenched back into the shrubbery that I found so inexplicable. The violence of the exit and the massive swaying of branches and foliage was quite spectacular and just left me feeling really surprised and shocked. I only wish now that I had got out of the train and gone to investigate the opposite platform, but, alas, I didn’t, so I’m left with the mystery. 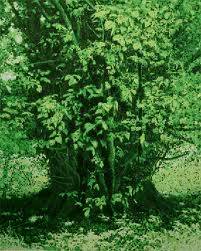