Thetford Walking Figure and The Figure Crossing The Lane

July 01, 2017
I live quite close to Thetford Forest and have over the years had a couple of strange experiences whilst out in the Forest itself and i wanted to share them with you. 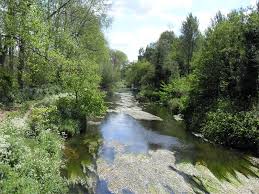 First Experience: The first  thing that happened to me, happened when I stayed outdoors overnight by the river Little Ouse. We had canoed up stream from Santon Downham until we reached the weir and river gauging station. We drifted back downstream a little to a suitable location to pull the canoe out of the water and with suitable trees to set up our hammocks for the night.  We walked until we were far off the beaten track and decided we would set up camp for the night in the spot we found.  It was about 02:00 hrs when we settled into our hammocks to get some sleep.  All was quiet and then we both heard slow and deliberate movement that approached us, we both asked each other at the same time "Is that you?" and we both answered "No, I thought it was you moving!?!?"

We remained silent and the sound of footsteps circled us before slowly walking away. Whatever it was would pause if we made any kind of noise and then start up again if we were quiet?  In the first light we could clearly see the trampled down tall grass and the route it took to and around us before returning to continue along the river bank. There is no path along by the river where we stayed, only tall grass and very vicious stinging nettles that could sting through your jeans. It was all really strange. Someone had walked up to the camp and walked slowly round the hammocks with enough noise we could hear them and then off again along the river. 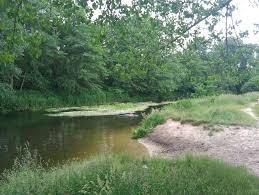 As we paddled back in the morning we went over what we had seen and heard to try and work out what or who it could've been. It could have been a person but i find it strange they would be walking along an overgrown river bank in the dead of night with no torch or light to guide them? How did they manage not to trip over, fall in the river or not to react to being stung by the nettles?  The only thing we could think of was it had to walk upright on two legs, this is based on the sound of the footsteps and the tracks in the long grass and nettles, plus i have good night vision and we were very aware of our surroundings. I don't think either of us wanted to say exactly what we thought it could have been incase it put either of us off bushcrafting in the forest. Neither of us felt scared or unsettled at anytime while whatever it was investigated our camp.

The second Account Happened the morning of Sunday 25 June 2017: I got up early and decided to take my dog for a good long walk through the forest. I parked my car down a forest track that has right of way with vehicle access permitted. We set off as normal, birds singing, cool air with the warmth of the sun just detectable on the skin. My dog normally walks about 2-3 meters in front when off the lead. She does seem to think that all creatures in the forest are potential play friends. She is also friendly to other people and dogs, she barks or rather yaps excitedly to engage the other dog to engage in chase me. I like to think I know her barks and their meanings quite well by now.

The walk goes well with nothing out of the ordinary. We go by a potential overnight bushcraft location and I see a woven willow or hazel screen has been erected at a spot that overlooks the railway line and Little Ouse river valley.The screen has about 4 rectangular apertures at various heights as if for binoculars to be used through. It is too far off the beaten track and marked trails to be for the average visitor. The grass is not trodden down near it so has not been used too much just yet. We carry on and take a shortcut back to the car. 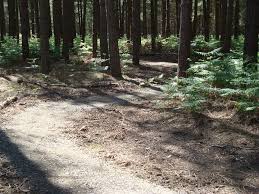 I put the travel harness on my dog and clip her in. Start the car and slowly head down the track to exit the forest. I have the windows down to enjoy the cool breeze and smile at my dog with her head out of the window. All of a sudden her head appears between the two front seats and she is staring at something ahead. Nothing I say or do will break her stare so I begin to scan the track and verge ahead for a person, a dog or deer. I am aware she has now stood up and is leaning forward as if to get a better look or to be in front. I cannot see anything out of place up the track ahead of us but I do slow down to a crawl just incase something should run out in front. All of a sudden she starts barking at full volume. This is not her greeting bark, it is so much more deeper and powerful. In between each bark she now growls and her top lip is curled back showing her teeth. In the 5 years I have owned her she has never ever displayed this behaviour. I stop the car and try to reassure her all is okay. She does all she can to keep looking ahead with snarls, growls and deep powerful barking. I like to think I know my dog well but this did unsettle me a little. I decided to carry on driving in the hope of passing whatever is causing her to be so agitated. By now she is pulling against her harness and I have never ever heard the sounds she is making before, I have also never seen her so agitated and focused on what she has decided is a threat. I keep scanning the track ahead and verges but I see nothing out of the ordinary.

As i'm driving i try to keep an eye on her to try and see her turn and face whatever it is when we pass by, but also on keep an eye the track ahead. For a moment I consider turning the car around and leaving the forest via the long way out to avoid whatever is the  cause of her agitation.  Up ahead coming out of the verge of tall grasses, bracken and nettle is something moving from left to the right.  Its movements looked fluid and deliberate.  My first thought was it is a vehicle of some type?  But the idea is quickly dismissed as how would it fit through the trees and who would it be? Before I can get a better look, it has crossed the track and i could no longer see it.  I did not get a chance to have a good look and see detail because of the distance and speed it crossed the track.  It was a grey/brown in colour with no sharp/defined outline such as a vehicle.  My mind is trying to match the image with what it could be.  My dog is still growling, snarling and barking.  As we pass the spot where it crossed I could see a parting of the bracken and grass but not like a deer trail that is clearly defined.  My dog is now facing the way the creature has gone, her hackles up, snarling, growling, deep barking and in a wide defensive stance. She then faces out the rear still barking until we get on the main road and head home.  I still have no idea what crossed that path and upset the dog so much, but she has never acted this way before.

I was meant to be spending tonight wild camping in the forest close to the sighting area but I have decided to give it a miss for the time being. I am tempted to return to the area tomorrow and have a good explore, may be take some photos or video for reference so I can track any changes? I will bring my dog (on the lead) with me for two reasons, firstly for company and secondly to see if she reacts and gives me a warning to remove myself and her from the area.

Thetford Forest as we know is a hotbed of british bigfoot and other strange upright figures that roam the woods of trees of the Forest. And as discussed before the River Ouse is one of the main highways for our wild folk here in the UK, i think this 129 mile route is important as the Ouse is one of the Rivers that join the River Ure that runs to the Humber Estuary where it joins the North Sea.  Crossing the Uk it would be a very quick and easy route to travel.

Also of note, not to very far away is the Old Church of St Catherine in Ludham and on the font of the church there are carved woodwoose. 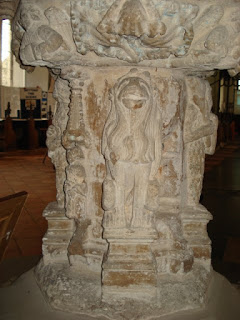 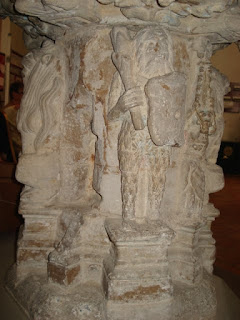 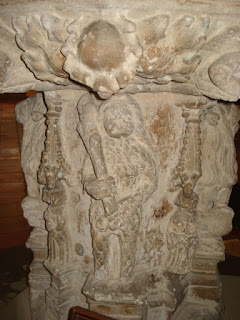