Christian and Patch Prt 2 The Figure in the Road


We continued to visit Newland lane with Patch but he would only come out of the boot if we stayed out of the car with him, in a way it was quite comical, looking back on it. He would quickly run to a spot nearby, have a wee, whilst watching us closely, making sure we didn’t get back in without him, and then run back to the car and jump in the boot. Shortly after his ‘fright night’ we had parked up at the passing place, Patch had already been out and we were talking and having a smoke. The topic of conversation was what could have scared him that night, he would never be that afraid of any person so we decided upon an animal he had never seen before, you hear about these big cats being sighted in the countryside, maybe it was one of those?
I had almost finished my cig when I noticed Jon had gone quiet, I looked and saw he was staring straight ahead at a bend in the road about 150-yds away. I followed his gaze to where he was looking. It was quite dark down the lane, but my eyes eventually got used to it. I could see that where the road disappeared at the bend, there was a clump of bushes to the right, these were about 6-7 ft high. As I stared I could see a dark shape, a figure partially obscured by the bushes. ‘Can you see that?’ Jon was asking, I replied ‘I could’ Rob was sat in the back and was asking ‘whats up? he couldn’t see anything. 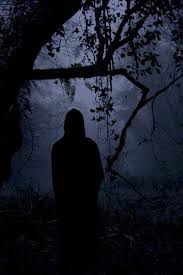 As we watched in silence “it” slowly emerged from the slight cover and moved into the road just a couple of feet. I couldn’t see any features it was just a solid black humanoid shape about 6 ft tall. It just stood there as if staring at the car ‘what the…’ Jon was saying. I reached down for the ignition and turned it so the power was on but not into the start position. I reached for the headlamp full beam, Jon could see what I was going to do ‘ready’ I said ‘go for it’ said Jon.
I pulled back on the stalk and the whole lane in front of us including the bend where ‘it’ was, was plunged into brilliant white light…..nothing! Nobody there. We were sure, positive, that we had seen a figure. Nothing could move that quick. 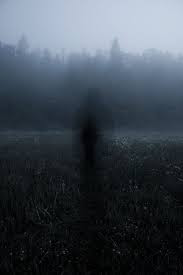 We looked at each other in disbelief. ‘What the hell was that’? Jon was saying. We described what we’d seen to Rob who hadn’t seen anything. With the lane now back in darkness we discussed what it could be, perhaps our eyes playing tricks on us? Both of us? Unlikely. As our eyes once again got used to the gloom Jon suddenly said ‘its back’ sure enough the figure could again be seen hiding behind the thin cover. It copied its earlier move as if taunting us. Again I hit the lights and again nothing! We decided it was time to go!  As I drove up to where we had seen it, I slowed right down and stopped we all had our windows down listening and looking but nothing could be seen and the only noise was the engine. We drove off to the pub and talked a great deal about ‘it’. Was this the thing that had scared patch, we were all creeped out.

In the coming weeks our visits to Newlands lane would be accompanied by sightings of this figure, it became the ‘norm’. It seemed to get bolder every time. Quite often moving right into the middle of the road. On occasions you’d see it once and then it would disappear, then noises could be heard at the other side of the hedge, movement, footfalls, even the sound of something heavy landing in the field as if thrown. All the time these noises were heard Patch would be growling in the boot. Sometimes the figure would be seen out of the corner of your eye darting quickly out of view as you tried to get a proper look. There were lots of strange things that happened some of which I’ve forgotten over the years. I will however never forget the next and last encounter I had with this thing. 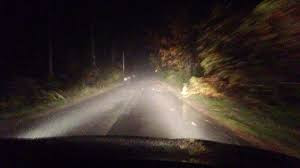 We have heard of this behaviour before, a figure that reveals itself slightly then hides and peeps around the trees, one minute there and the next gone, heavy footsteps and thuds, and seeing something that can not possibly be there. It doesn’t matter how you try to explain it away or rationalise it, you are left with the sighting, the experience and the doubt, with nowhere to go and no one to ask. I did reassure Christian he was not the only witness to something like this, there are many of us, here in the UK and worldwide, who have nothing to tell but what happened to us the day our lives changed, but at last we do have a place we can share this and hear the experiences of the other witnesses to.