Mike's Werewolf Journal.. 7 A Hunting Werewolf and the Tall man of Four Barrows 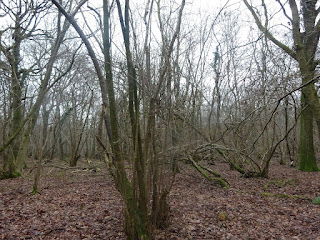 Date- 18.11.17
Search area- Zone 1
Weather- Drizzle, rain, overcast (grey cloud cover) but with good visibility
Temp- 6.5c
Comments
Today’s object was to search zone 1 and try and find the adolescent Werewolf that has been popping up now and again for the last two months and that I’ve photographed on two occasions, alas one of these photos I deleted by mistake.
General
I had a good look around at first, as usual there was no Bird song and the woods had a heavy presence of being watched, something I have started getting used to but I’m still very nervous when I'm out researching. Anyway today was a day of an unexpected event, and something happened similar to the 12.2.17 incident with the Deer, I was out there for a while and after some time, I'm not sure how long, I decided to stop for a cup of coffee, so I’m stood in the drizzle with flask in hand just enjoying the rain and the day and I suddenly noticed three large Deer walking at the edge of the wood that borders an open field, they were maybe thirty meters or so from my location and as they passed by, something big and black with a white stripe along its body dropped out of the trees and made a line for the deer, and almost in the same moment I saw two Deer run back the way they had just come from. It didnt run up to the Deer it Dropped from right above in the trees in a flash of colour, i could not believe what i had seen.

This happened almost or seems to have happened in a split second it was so quick, I was rooted to the spot. I waited for some time and I then decided to go and search the area where the deer had been but I couldn’t find any signs of a struggle or blood etc!. This event was totally unexpected and I knew at that point it was time to go home. I had planned to spend the day out and look in two other areas but after this I thought it was time to call it a day. Search time 11.30 to 12.25 hours 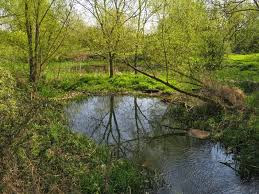 Date- 25.11.17
Location- Swindon
Part 1
Yesterday I went to Swindon to see a former work colleague who had recently moved to a new housing estate situated next to the Great Western Hospital near Junction 15 on the M4 Motorway. Now literally no more than 200 meters west of the Hospital there is a small wooden copse, which my friend wanted to show me after lunch, he had described the area to me when he searched it back in the Summer, saying that at that time the whole area had been littered with animal bones and he found a burrow that was big enough for him to crawl into, my friend is 6’3’’ and is a solid 16 stone in weight, so it was a considerable size burrow, he stated at the time he didn’t crawl into the burrow because nothing in these Islands should be that big that it can make a burrow that size.
Well we reached the small copse and as we crossed a small stream leading into the copse I saw a den with scattered branches opposite the entrance almost as though it was some sort of defencive feature. We wondered around for about 10 minutes trying to find the burrow but there were so much fallen leaf litter on the ground that it was hard to locate. I asked my friend if any Cats or Dogs had gone missing from the homes nearby, and he said a few had gone missing, mainly dogs, but he also stated the waste bins always seem to be tipped over and riffled through as though something was trying to find food.
(Note- the Wooden Copse in question is called the Day House Copse and is situated along the Dorcan Stream)
Part 2
Date- 3.12.17
Search area- Swindon, Day House Copse
Weather- Overcast with sporadic rain showers, visibility good
Temperature- 9c to 11c
Comments- I finally managed to revisit the wooden copse at Day House and I have had a good look around today, I found the den which was still standing and I took some photos using my mobile phone. Again I could not find the so called huge burrow, I searched from one end of the wooden copse to the other end, but no luck. There was a lot of tree sign and snaps etc also there was a lot of Bird song which was a good sign. I thought today was a good day out. And no feeling of being watched at all today. Search time from 11.40 to 13.20 hours. 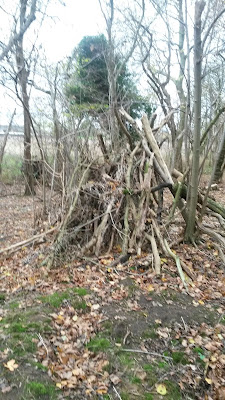 NB: I had no knowledge of the Dorcan Stream area until Mike sent it in this report and over the years I have added accounts to the map I have long forgotten, sadly when there are around 500 some do fall through the cracks, so I went to the map for a look at the area and found a note i had left to myself way back in 2013, this is the following account found in a paranormal database filed under Demon? Dorcan stream is the the four barrows area, named for the ancient barrows and hill forts built by our ancient Folk, these barrows are visited by many paranormal experts and ghost hunting groups, this is their account of a night at Four Barrows they will never forget: Saturday 12th May 2012, a small group of Twilight Shadows Paranormal team decided that we would go on a three-location paranormal road trip.
Our first location were some allegedly haunted woods in Wiltshire.The woodlands lies on an ancient site and as soon as you enter them, an ethereal, atmospheric sensation, envelops you. It does not feel entirely comfortable and you definitely feel that you are being watched. I have been to these woodlands many times and I have had many experiences, witnessed by other people. 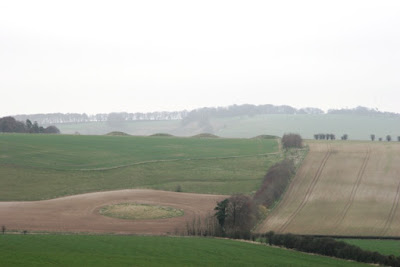 PAST EXPERIENCES "I have seen many shadow people here and one Halloween night, Loretta saw a group of these entities, who walked past by her in single file, each turning their head to look towards her as they passed, not seeming to recognise her, looking straight ahead and then walking on.
Several people, including another team member Vikki have heard growls right beside them in these woodlands which is unnerving. I myself have actually seen a semi - transparent, large, dog-like animal which looked very much like a wolf. It just ran through the clearing where I was standing and disappeared. Although I could just about see through it, I could see that it had a dark coat.
I have also seen the figure of a very tall man standing by a tree. He was huge and didn't appear to be wearing any clothes. He was so tall, I was terrified. He did not look at me but to the right of me. I turned around to see what he was looking at and when I looked back, he was gone.
I have also heard the sound of women chattering although the voices are always indistinguishable.
I hope as Mike continues his investigations into this area and the Dogmen and Werewolves of the UK he finds not only answers, but also other accounts and witnesses to the strange happenings in our woodlands to date.  And I hope he continues to share them with us here.  When I first started to share the accounts I was unaware of just how many people were reporting encounters with Canine type creatures.  There were far more witnesses than I had realised, like the Wildman witnesses there is a pattern to the description that seems to follow through all of the accounts, a tall upright walking dog featured creature, that moves at speed can drop or raise from two legs to four and quite often seen around areas of swamp ground and unwanted woodland, as each new account comes in i see less and less of the Hollywood type Werewolf image and more of a Canid like creature by far.
D. L. Hatswell Mike 5/12/17
playlist https://www.youtube.com/watch?v=ruGA_3Q5R0A&list=PLatvASAlQI948nJXDUdap0z_tMC30h9an