Is the Hard Stand Monster or the Standing Wolf at Raf Alconbury a British Bigfoot ? This account was kindly passed to me by Chris L. Huff writer and researcher of all thing strange who came across the story when researching accounts for his work into the paranormal accounts across the UK.
Witness Statement: I almost fell out of my chair when I read your intriguing story and the account of the “hard stand” monster at RAF Alconbury. Just tonight, my father shared with me his stories about this base and it prompted me to do the internet search that brought me to your message. I think you’ll find my father’s experiences at this air force base in the early 1970s very interesting.
He was the NCOIC of a group of 3 men and their dogs, charged with guarding bunkers within a large, fenced area. I believe that nuclear warheads were stored beneath many of these bunkers. One foggy night my father got a radio call that there was an intruder within the perimeter and shots were fired.

He tore out in his truck and sped towards the location of the shooting. Seeing a figure in the fog, he pulled over thinking it was one of his guards. He rolled down his window and was screamed at full in the face by what can only be described as a man-like, bipedal creature. My father nearly soiled himself in fear. In an instant the thing ran off at incredible speed and my father drove after it. Within moments it had sped past another of the guards, who also fired upon it; he missed due to the fact that he was practically dragged backwards by his guard dogs who were yelping and straining to flee in the opposite direction. The third guard and his dogs were running towards the scene when they turned the corner of a bunker only to be intercepted by the creature running at full speed. As his dogs wailed, the thing hit the taut leashes and pulled them away from his grasp, lacerating a good deal of skin from the unfortunate man’s forearm in the process. My father and these men witnessed this creature make fantastic, running bounds across the grounds before leaping over two tall, well-spaced barbed wire fences in a single bound. It disappeared into the surrounding woods.
My father’s description of the creature is little vague, but in his defense he only saw it briefly and, as he puts it, the whole situation was fast, confusing and difficult to process. It was hairy, approximately 5’9” in height, and had intelligent, human-like eyes, a flat nose, and large ears. The teeth were large but not fanged. The lower face was rounded in a way that suggested the look of a walrus. The face was narrow around the eyes, but the head flared out again at the top. It had very muscular, frog-like thighs. He believes (but is uncertain) that it had reverse articulated legs like a horse. 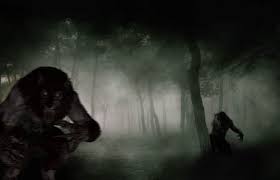 Interestingly enough, my father also shared with me what I think is the same tale of the Phantom jet that you described Chris. Like you, he got the story secondhand, but in his version, the mechanic involved did not die, but instead lost his sanity after witnessing the “hard stand monster”, and was eventually kicked out of the service. Having seen this creature with his own eyes, he fully believed the account.
Raf Alconbury itself has many reports of an upright hairy humanoid creature, described as either a werewolf, a standing wolf, and a human ape, known to run off when spotted into the North Woods.  I have reported on these account but thanks to Chris i was able to find other reports that from serving american soldiers who returned to the USA and reported their encounters with the hairy hominid,  and of British men who have served at the base also report the same creature.
A mechanic who was: “carrying out some routine work to an F-5 Aircraft, parked on the runway, a job that should have been completed in an hour. When he failed to make the telephone call, requesting a lift back from the Hangar, a search went out to find him. They found him sitting in the aircraft, as white as a sheet, with the canopy closed. Although I asked him, many times, what it was that he had seen, he declined, saying that it had frightened him so much that he refused to go anywhere near that location again. We discovered, from another source, that the man had seen a terrifying hairy humanoid, which had walked past the aircraft.”

“Dennis Prisbrey, who was stationed here between 1973/5, told of his colleagues who saw a “creature” near the north side of the airfield. One sighting of it scared a colleague so much that he jumped into the cockpit of an aircraft and refused to get out. The creature was also seen climbing over the security fence, and entering the North Woods. Wesley Uptergrove who also saw the humanoid creature and said he tried to pursue it in a truck. He described it as 5ft 9″ tall, with human-like eyes, a flat nose, and large ears.”
Sergeants Lee and Jackson…. one night, while on patrol with their two dogs, they saw some movement near the towers and called the Main Gate to check if any workmen were still on-site…. As they approached the tower, they came face-to-face with a hairy figure. The dogs stopped in their tracks, absolutely terrified, frantically trying to get away…..The truck arrived just in time to see the creature, whatever it was, climbing over the security fence, where it was last seen entering the North Woods.”
One chap reported in a paranormal blog: “I encountered a werewolf (for lack of better description) in England in 1970, I was 20 years old when I was stationed at RAF Alconbury. I was in a secure weapons storage area when I encountered it.  It seemed shocked and surprised to have been caught off guard and I froze in total fright. I was armed with a .38 and never once considered using it. There was no aggression on its part. I could not comprehend what I was seeing. It is not human. It has a flat snout and large eyes. Its height is approx 5 ft and weight approx 200 lbs. It is very muscular and thin. It wore no clothing and was only moderately hairy. It ran away on its hind legs and scurried over a chain link fence and ran deep into the dense wooded area adjacent to the base. I was extremely frightened but the fear developed into a total commitment of trying to contact it again. I was obsessed with it. I was able to see it again a few weeks later at a distance in the wooded area. I watched it for about 30 seconds slowly moving through the woods”
Another gentleman said “In 1978 I was stationed with the US Air Force in West Germany and was sent to RAF Alconbury in England for a 30 day TDY (temporary duty.) When I mentioned to a co-worker I was going to RAF Alconbury, he told me that he had been there in 1972 when one of the aircraft mechanics in his squadron had been found late one night in the back seat of an RF-4C Phantom jet, supposedly after he had died of “fright.”  The story was that a subsequent investigation revealed unexplained scratches on the glass of the canopy of the jet, and this started a rumor circulating that the unfortunate crew chief had been the victim of what came to be known as the infamous “hard stand monster.”
I know a few researcher here in the UK that will be visiting Alconbury and the surrounding woods for any signs of our Wild Folks, if you would like to join them or indeed go yourself you can contact me at ABOUT
D. L. Hatswell