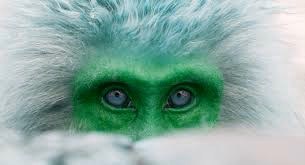 It was the summer of 1996 when people in the Torbay village of Churston, Devon, started to report seeing a Bigfoot-like beast in the dense, creepy woodland. What were these people experiencing? Was it a Bigfoot? Was it all a hoax? Was it mass-hallucination? We here at British Bigfoot Research hoped to find out when we visited the area last year.
The sightings of the creature lasted for around six weeks.  Up to fifteen witnesses came forward with their sightings. The Creature was described as being around five feet tall, had brown hair covering its’ body and was described as having a green face.  The witnesses stated that the hominid didn’t have a tail. The height of around five feet rules out that this was an escaped pet monkey. On two occasions the being was seen swinging from tree branches.
So, what was this being? Could Churston Woods really be hiding the British Bigfoot? We have no reason to suspect that the witnesses were lying and also rule out that they were seeing things. Why would random people all of a sudden start seeing man-size hairy hominids? But if there is a Bigfoot in Churston Woods, why had there been no sightings before 1996? Were there witnesses before 1996 who did not come forward out of fear of ridicule?
In 2016, a researcher visited Churston to see if anything might be forthcoming, but our search in the area brought up nothing of interest unfortunately. We found no evidence of tree structures, snapped branches or footprints. Churston isn’t a very large area of woodland: Is it large enough to hold even a small population of hominids?  Could this be an area only visited when a food source found in the area is available? The area is situated between the coast and inland woods and would provide a multitude of options for any hungry forager. Or perhaps it is a corridor of sorts going to and from larger wooded areas? The honest answer is we do not know, but the fact is many rational people saw something there and felt it strange enough to report. This sighting is often called the Churston Green Faced Monkey. 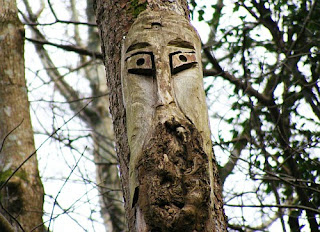 Whilst no more sightings of the ‘Bigfoot’ have been reported (as far as we know) there was a strange encounter in 2006, when three friends who were camping experienced something that tormented them. They were camping at the nearby Seven Quarry. All through the evening the friends felt like they were being watched and felt very uneasy. Then, in the early hours of the morning, they heard heavy footsteps outside the tent and something hit or kicked the tent, pressing heavily against it. It was only when they pushed it back that the thing outside walked away. This is very interesting as this sort of activity has been reported by many campers in the USA, in areas where Sasquatch have been reported. Is this the same sort of behaviour? These are questions that still need answering. We hope to make more progress in our research into the Churston sightings and will bring you more information as it comes.  If you are available to visit and make a report on the area that would be welcome, or if anyone local knows one of the original witnesses or can remember the incidents themselves – there may be information with a local newspaper or library inaccessible to us online – any help would be greatly appreciated.
The woods are very easy to find but you do have to walk approximately three quarters of a mile to reach them. Starting from Brixham, drive out past the Toll House on the main road towards Churston, then take the right into Churston Village, just after you’ve passed the two gate houses where Gramercy Hall School used to be. Drive down here and past the tennis courts, bear right past the turning down to Churston Court Inn, and on your left there’s an alcove with a stone stile leading to a path. You can park here or if it’s full you can park tucked away on the small road that you just passed that takes you to the Churston Court Inn. Hop over the stone stile and walk down the path and you’ll come to a stone gateway that leads into Churston Woods. There’s an information board above the location just as you go in. Follow the downwards path until you reach flat land, bear right, then continue walking down towards Churston Cove. You can’t miss it.