September 16, 2015
Location: Loch Awe - Just off A819, by edge of water
Date / Time: 28 December 2014
Further Comments: A photographer setting up his equipment here heard voices and giggling, even though there were no other people around. He fled after something started skimming stones across the ice in front of him.

There are two other strange accounts from this area, 1. a couple camping had the feeling of being watched all the time they were at the site, in the middle of the night the male camper went out to relieve a call of nature, and was filled with a feeling of real danger, so packed up camp and left. 2. is a young lad who had also had the feeling of being watched and as he made his way out of the area, heard wood knocks and a scream.

i also came across this account: Around Easter 2000, my husband and I were driving north past Loch Awe for our first weekend away together. As we drove alongside the loch, I saw to my amazement something that looked to me exactly like pictures I'd seen of the Loch Ness Monster. A long neck and head sticking out of the water at the front, and two humps behind it. It was moving quite swiftly through the water.

I was completely astonished. I had never heard of any monster in Loch Awe. I actually said nothing, thinking that my new fiancee would think I was completely mad if I announced I could "see the Loch Ness Monster" so I just watched in silent wonder. A couple of hours later we stopped for lunch at a pub. There was tourist info available in the form of leaflets there, and one was about Loch Awe.

Imagine my feelings when I read, "Loch Awe is said to be home to a monster like that of Loch Ness". "It does!! I saw it!!" I yelled, beside myself with excitement. Needless to say my fiancee thought I was crazy. But I'm sure I really did see what people call the Monster of Loch Awe.

Loch Awe is a large body of water in Argyll and Bute, Scotland. It has also given its name to a village on its banks, variously known as Loch Awe, or Lochawe. There are islands within the loch such as Innis Chonnell and Inishail.

It seems Loch Awe is a strange place but beautiful non the less. 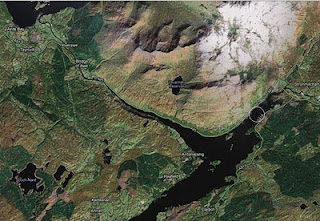 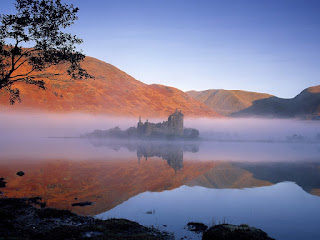