Shucks with Monkey faces and other Tales

Witness Account: This is an  experience I had in early 1973. At that time I had not heard of any legend or story about Black Shucks, and only realised that relevance...some years later...I worked an evening shift in Ipswich at the time, leaving for home in Woodbridge at midnight. I arrived in Ipswich Street, Woodbridge, about 12.20 and shortly after taking the left fork into Old Barrack Road, I became aware, in the side glow of my motorcycle headlight, of a huge black dog, bigger than any I had ever seen before or since, keeping pace with me at a distance to my left of about 3 to 4 feet along the edge of the road.

I was very concerned because of its extraordinary size and proximity, but what made me most alarmed and made me feel that it was more than a real dog, was its gait. The animal was much larger than a Great Dane, pitch black all over, heavily built, I would say about the weight of a growing calf, the mouth was open but not panting, and I did not see its tongue, and it ran or loped or glided alongside me with a smooth motion and no apparent effort whatsoever.

It was not bounding, leaping or running hard but seemed to glide smoothly and effortlessly in what I felt to be an unnatural manner...as I was riding a motorcycle at about 30mph alongside this huge black dog, I was alarmed, and it...'gave me the creeps', so I increased speed sharply to leave it behind. However, I found that it easily kept pace, still smoothly, and looked round at me as it did so, and, by this time...thoroughly scared, I sped down the road, over the brow of the hill and down to Seckford Street. It was just over the brow of the hill that I lost sight of the dog.  Overall, the experience must have lasted over a distance of 400 to 600 yards, and I was so shaken by the meeting with the dog that I was white and shaking when I arrived home...at...St. John's Hill…

A shaggy Black Shuck with the face of a Monkey,  is said to haunt an overgrown and little-used lane called Slough Hill in the parish of West Wratting...Police Constable A. Taylor, of The Tiled House, Panton Street, Cambridge, tells me that, in his youth, this lane which is on the road from West Wratting to Balsham was haunted by an extraordinary thing called 'the Shug Monkey.' It was, he says, 'a cross between a big rough-coated dog and a monkey with big shining eyes. Sometimes it would shuffle along on its hind legs and at other times it would whiz past on all fours. You can guess that we children gave the place a wide berth after dark!'"


"The Shug-monkey...haunts the short stretch of road, and the adjacent lanes, between West Wratting and Balsham...With the body of a shaggy sheepdog, only black, and a Monkey's face… 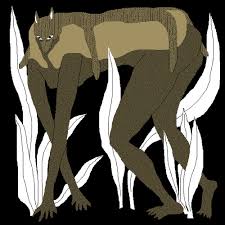 
"Jack Bradford was a gardener who lived at Heath Farm which is the other side of the Gog-Magog Hills also bordering the Wandlebury estate and the golf-course...He had been visiting his young lady with whom he had been 'walking out' for some time. Her name was May and she lived with her parents in a farm cottage on the farm which backs onto the Wandlebury estate which then belonged to Lord Grey.


She worked as a house-maid in the mansion, now unfortunately mostly depleted but part of which still stands at the heart of the Wandlebury Ring....Unfortunately on the night in question his bicycle had got a puncture when he came to go home after saying goodnight to his sweetheart. It was a dark and windy night and he walked up the hill pushing his bike, his path illuminated by a flickering acetylene lamp.


Suddenly he heard a strange unearthly panting sound coming up behind him along the grass verge at the side of the [A1307] road.  He had lived on a farm all his life so he had no fear of any normal animals however big. The sound and presence of this beast was however different and he felt a strange chill of fear sweep over him. The great black dog, for this is what it was, brushed past him almost knocking him aside though not quite touching him.


It was loping along at great speed, its great tongue hanging from the side of its mouth and making a fearful panting sound. It was the sheer size of the beast that struck him and what stuck in his mind most years afterwards, as he related the tale to me. It was, he swore, the size of a small donkey and in his words 'black as sin', 'shaggy and gruesome looking.'

He was badly frightened and had to stop for a while leaning on his bike to compose himself before hurrying back home. After telling his father the story he was told that he had probably seen 'old Black Shuck', who 'often runs over the Gogs of a dark winter's night'." 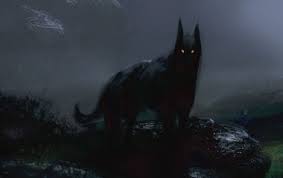 One Night in Norfolk

"We holidayed on the Norfolk coast, one thundery evening my 6yr old son and I drove along the coast to find a shop open to get a pint of milk. I parked up then noticed my son had nodded off in the backseat so ran into the shop and left him there. On returning to the car my son was sat upright in the back, shaking with a face as white as a sheet. I thought he had just been scared of the thunder, but as I opened the car door I was alerted to a rustling in the trees in front of the car and saw what can only be described as an extremely huge scruffy dog heading away. My son was sat staring motionless at where the dog had disappeared. I asked if he was ok and what was the matter, he answered that he had just seen a werewolf! I laughed and said "Don't be silly, it was just a big dog" but he said "No, it had orange fireballs in its eyes and it tried to get in the car". The following morning when packing up the car I was astounded to find big muddy paw prints on the bonnet and the back windows!" 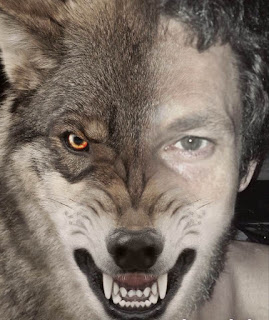 A large beast  with a taste for mutton is believed to be roaming the most remote parts of northern Scotland, stripping sheep from their skin and leaving no trace but bones and wool.  The mysterious beast's latest catch is a hefty and healthy ewe of about 50kg. Her wool was neatly peeled off her skin before it was eaten. The carcass was found less than 100 yards from a croft in Swordly at the weekend.
Jim Johnston, 66, who lives in the village of Bettyhill, has developed a particular interest in the story and photographed Mrs Mackay with the carcass of her sheep. He said that over the past five years, about 40 sheep have been found dead, apparently killed in one go, all neatly stripped of their skin before being eaten, across an area of about 200 square miles between the parishes of Farr and Tongue.


“The same pattern is happening. Whatever animal is doing it, it manages to peel the skin off, probably because it doesn’t like the wool, and it skins the sheep in a most expert way - removing the skin along with the wool.“It has a very powerful bite. It crunches right through the bones and kills the animal very easily. “It’s a very interesting phenomenon.” Mr Johnston remembers one instance when two animals killed in exactly the same way were found about 200 yards from each other. “The first time I was convinced it was a cat but this time I am less certain. 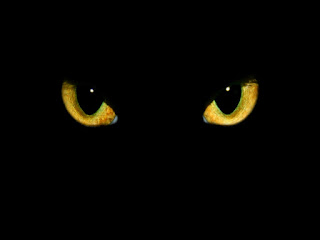 Who knows what is stalking our country lanes at night, but if you're out and about keep a close eye in the wing mirror when you're driving, or carry a large stick in the fields.
D. L. Hatswell