March 23, 2015
Arrived at killhope about four oclock, i was interested in the area as the last time i researched here, i heard a loud scream as if a woman was screaming in the wood. We parked car and went into the woods, half way in came to trail blocked by falling trees, as we entered we heard a knock, we went further in bit of a gorge tried go through but again blocked by falling trees as we left heard another wood knock, we carried on up to the dam at top. It started to rain so went back car to get our waterproofs on. we decided to go for a walk around the perimeter, but as we got to the top heard few branches snapping and breaking, at the time we put it down to  animals and carried on walking around. it took ages and nothing more happend so as we get ,backto the car we decided to go through the dense trees, very creepy luckily i had gps otherwise i would of gotten lost.  We came onto a path walking back, I shined the torch behind us and saw a dark figure shoot past very fast across the path, again we put it down to animals.
It was getting  late so went back for the tent, we  were getting hungry, so was going to get the barby, when we heard a noise, so my mate shone a torch at the trees, and there stood a dark figure about 7 ft tall, hiding behind the trees he turned the  light off for a second, and turned back on, IT had crouched behind the fence, he quickly turned the light off  again then on, IT had gone. 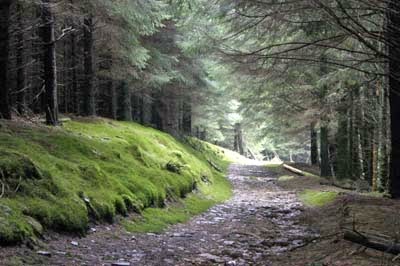