January 30, 2016
......................The first 'Invisible Heavy Breather' contact.....................
Area - Colwick Heights, at the edge of part of Southern Nottingham.
Weather conditions - cold, nil Moonlight, slight Southerly Breeze. Intermittent rain showers.
Equipment - 2 walkies-talkies, 1 large tape recorder and several torches.
Witnesses - John H. John C. Pete J. Graham M. Ron G. Syd H. myself.
Time of incident, approximately 12:30 a.m. till 12:45 a.m.
One of our team members (John H.) was alerted by the public that dog walkers and canoodling couples were being disturbed by something roaming the Heights at night.
A short time later, on a non-alcoholic Saturday night, we several stalwart Paranormal investigators, set of for the area in a dormobile van, arriving there at approximately 11:p.m. We parked approximately halfway down the large, short grassed field and facing the way we had entered it. There were/are two small woods, one on each side of the field, the one on our left containing a small quarry. We patrolled the area in pairs, carrying one walkie-talkie and a torch apiece. This was down the side of each wood as well as the field area itself. Eventually, it began to rain, so back to the van for a well earned cup of tea or coffee for all of us, the rain pitter-pattering on the van's metal roof.
We sat comfortably, three at either side of the van, facing each other and the driver in his seat. It was while we were discussing something or other, that the driver shouted for quietness. The rest of us could hear nothing but the rain falling on the van's roof. "Listen", he insisted. We did and that's when we first heard a faint, but heavy breathing sound slowly approaching towards the right side of the van. We sat warily, as we listened to the slowly approaching sound. Passing by the outside of the van, the deep, heavy breathing sound blotted out the rain noise falling on its roof. The breathing sound was that loud. Reaching the two back doors, the extremely loud breathing noise lowered in height down to the level of the foot square windows and stayed there. The door windows were approximately a foot from the top of the doors. Something was staring through one of the windows at us and we couldn't see a thing at the window, but the heavy, stentorian breathing continued unabated all the time. Ron G., sitting next to me and nearest the back door on his right, shakily raised his left arm into the air, clutching a heavy, foot long rubber encased torch and holding it like a club. Well, something was better than nothing, i suppose, even against an 8 foot something or other as we guesstimated its height by the height of the van roof, before it lowered downwards slowly to peer through the window.
Eternally long, long seconds passed, listening to that loud, heavy breathing sound, our eyes fastened on the two door handles incase they began to be pressed downwards for the two doors to open. NO....... thank you. I think we all gave a sigh of relief, as the breathing sound eventually rose up to its full height once more and then turning, began to walk away slowly in the direction of the wooded quarry. We all sat dumbstruck and silent for awhile. It wasn't till the heavy breathing was half in volume of what it had been at the back doors of the van, that we suddenly sprang into action, springing out of the van and dashing to the back doors. In our torchlights, the wet grass at the back of the doors didn't appear to be more compressed than the surrounding rain soaked grass. Yet something had stood at those doors for quite awhile. We then immediately shone our combined torch-beams in the direction of the slowly receding heavy breathing sound, which we could plainly hear, but nothing was visible as 'It' continued to slowly amble away in the direction of the small wood with the quarry in it.
Back inside of the van, we discussed the strange situation for a few brief minutes, then, with the van's engine roaring thankfully to life, we left the field and area. In our state of paralised awestruckness, we even forgot to switch the tape recorder on to our later great dismay. We suffered all that for nothing.
The incident was logged as 'Unknown'. You can say that again.
Reported by B. Ratcliffe 30/1/16 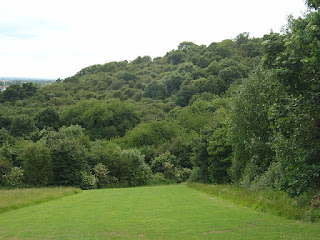