May 06, 2015
Investigator Damon Simms has explored the dingiest corners of some of Staffordshire's spookiest places. This week he has the tale of a friend who encountered something unusual in the Staffordshire Moorlands...
MAYBE I notice it more than others because of my fascination with the paranormal and unexplained, but it seems to me that the supernatural surrounds the lives of so many people.
Over the years I've had numerous, lengthy conversations with perfect strangers about an unusual sighting or experience, and every time it's really been impressed upon me just how serious each and every one of the people I speak to really are.

What's worth noting is that many of the tales that you'll read here are relayed from people who aren't 'ghost-hunters' – they don't actively seek the supernatural.
Instead they're normal people who have had their day-to-day lives invaded by something unusual at some point – and that is true of this week's case study, too.
It involves a friend of mine, whose name is Martin – he's a local man.
In the early 90s he was regularly travelling to Nottingham to visit a girlfriend.
One night in the summer of 1992 he was driving home from the East Midlands at around 11pm on his regular, well-trodden route through Ashbourne and the Staffordshire Moorlands, when he encountered what he still describes as a 'wolf-like' creature at the side of the road.
For those of you who've read this column previously, you may be wondering why I'm telling conflicting tales – after all, I told you about the near-exclusivity enjoyed by Cannock Chase when it comes to Werewolves, or creatures purported to be them.
But those cases are only recorded because they were reported to the police, so who knows how many sightings like Martin's there may have been over the years?
The creature Martin described to me was around eight feet in length with huge rippling shoulders that made it look vascular, like a young bull.
It began to emerge from the tree-line, making its way into the middle of the road – stretching to its full size to reveal the true enormity of its torso, filling the road in the process.
As Martin approached, he cut his headlights to try and break the transfixed look on its face, a look that had appeared when it stopped dead in the middle of the road.
After a few seconds of rising panic as he wondered why on earth he'd plunged himself into darkness, he put his headlights back on and saw that it had moved to the side of the road before, looking over its shoulder, it slunk off into the undergrowth.
Driving home, he asked himself the obvious question – what could it rationally have been?
But he came up short, he could think of no logical explanation – it was a creature of the like he'd never seen before.
Martin drove the same route on many more occasions and never saw anything to suggest that wild beasts crossing the road were a regular occurrence, but his insistence that it was more than justifiably 'wolf-like' is unwavering.
He's one of a number of people who swear that 'unknown' creatures exist, a greater number than you'd expect, too. 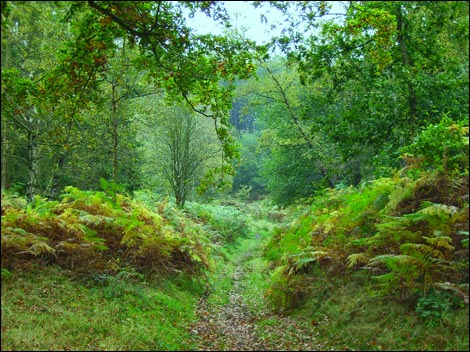