May 12, 2015
Date of incident : 6th Dec 2014, around 6pm, Edinburgh city bypass (West of city).
This was reported in February 2015 by a work colleague: He describes driving home from watching a football match in Falkirk (Hibs v Falkirk away, that puts the date at 6th Dec 2014). He was with his 2 teenage children and a friend and they were driving on the city bypass near Edinburgh at around 6pm when he saw what he described as "something that looked like a cross between a chimp and a gorilla" moving on all fours along a strip of embankment just under the Calder roundabout on the west side of the city bypass. He stated "it was moving at some speed......it seemed like it was scared.....it was pretty big..." He estimates that it was around 4 feet high at the shoulder when on all fours. He states that he turned to his daughter who was in the front passenger seat and asked if she had seen it too, she said she had. He did not see its face, just the shape of it.
This location is highly unusual, there are no reports of escaped chimps or any other primates at that time from Edinburgh zoo or the wildlife park in Stirlingshire. It is very close to the east side of the Pentlands hill range where reports of howls and a sighting have been documented previously. The person who reported this was good enough to show me exactly where it took place, it is a strip of land on the edge of the bypass and not what we would expect for a typical location. However, I have no doubt as to the credibility of the witness, I have personally known him for 5 years and he is not prone to fabricating stories. I will try and speak to his daughter if the opportunity presents itself in the future. Reported with permission. 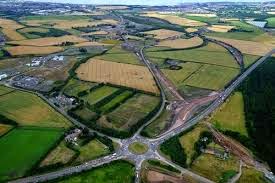 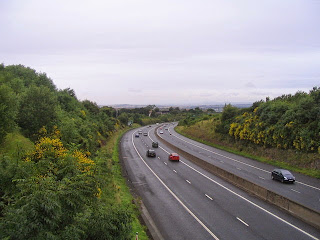