April 10, 2015
This account was written in response to an article on trows published in a Scottish magazine in the 1960s. It came from an Englishman who had spent nearly two years on the island of Hoy during the Second World War:
"One stormy day in winter I was walking or struggling along the cliff top at Torness. The wind was high and howled about, low-lying, swirling clouds part-enveloped the land in misty rain. At times the pressure was so great that I was forced to bend and clutch at the heather to retain a footing.
On one such occasion, on looking up I was amazed to see that I had the company of what appeared to be a dozen or more ' wild men ' dancing about, to and fro. These creatures were small in stature, but they did not have long noses nor did they appear kindly in demeanour.
They possessed round faces, sallow in complexion, with long, dark, bedraggled hair. As they danced about, seeming to throw themselves over the cliff edge, I felt that I was a witness to some ritual dance of a tribe of primitive men.
It is difficult to describe in a few words my feelings at this juncture or my bewilderment. The whole sequence could have lasted about three minutes until I was able to leave the cliff edge. 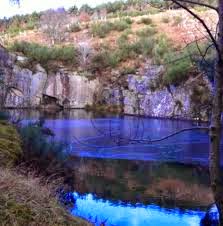 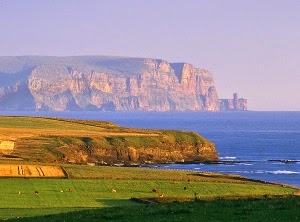